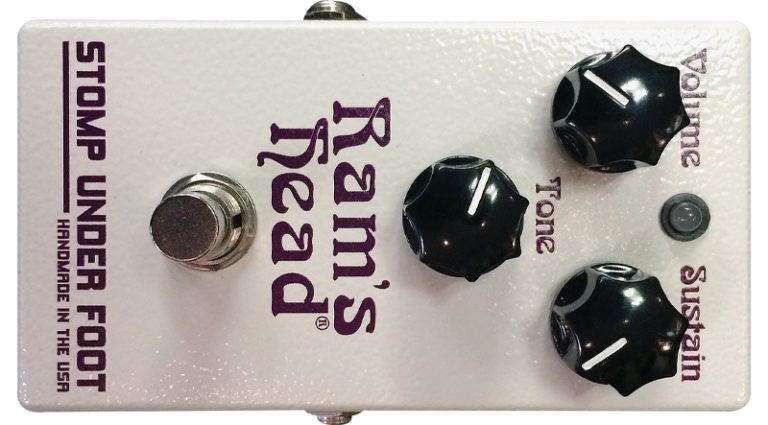 Matt Pasquerella has a reputation as a pi connoisseur… no, not the eating kind, the fuzzy kind. The creator of Stomp Under Foot effects has been building some of the most sought-after Big Muff Pi clones on the market.

Testing was accomplished with a late model Gibson SG Standard loaded with 490R and 490T humbuckers through a Fender Blues Jr 15-watt 1×12″ tube combo.The Ram’s Head showed an abundance of that classic late-’70s fuzz tone, but with a fuller, warmer midrange and a more musical top-end that is less scratchy-sounding than a vintage counterpart. The Ram’s Head Tone control also has a generous sweep, allowing for a variety of fuzz/distortion sounds, from dark and smooth to old-school scratch.

With the SG switched over to the neck pickup and the pedal’s Tone control on the darker side, the pedal’s drive and sustain were super-smooth with a singing musical quality that allowed single notes to hang on nicely, great for slow melodically phrasing. At the bridge pickup and with the tone control set on the brighter side, the tone was crisp and biting with a nice articulate percussive edge that wasn’t too harsh. With the sustain control set in the lower to middle range, the pedal also worked well to add a bit of analog lo-fi flavor to the amp’s overdrive channel, as well as sustain and percussive top-end.

A well-built, thoughtfully engineered pedal with a smooth and full classic fuzz tone, the Ram’s Head offers up nice musicality and nearly endless sustain. Certainly a worthy update of – and affordable alternative to – the vintage classic.