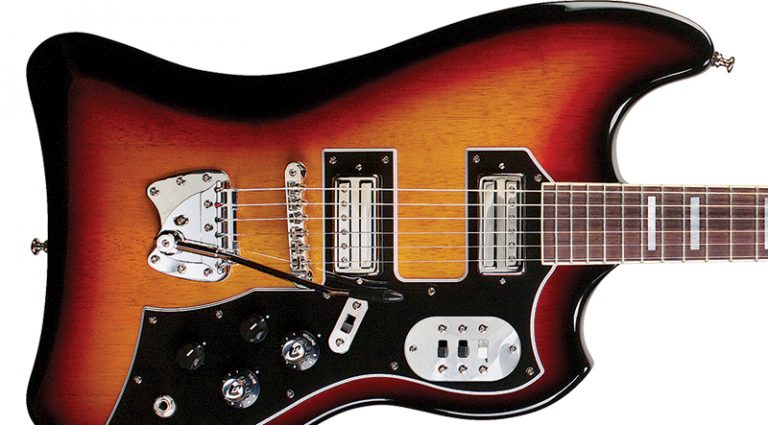 Sometimes admired, often maligned, the cult classic Guild S-200 T-Bird has enjoyed a rebirth in the hands of Black Keys guitarist Dan Auerbach, whose use of a vintage S-200 caused some to ask, “What the heck is that?” Thanks to Guild’s continued campaign of Korean-made vintage reissues begun a few years back, the S-200, once a favored guitar of Muddy Waters and the Lovin’ Spoonful’s Zal Yanovsky, is once again readily available to the masses.

Other manufacturers have offered lookalike S-200 type guitars over the years, but this new Guild model is the first to offer an identical re-creation of the Jaguar-like circuitry featured on the original S-200 back in the day. The selector switch on the S-200’s smaller oblong plate selects between Mode 1 and Mode 2. Mode 1 engages the neck pickup only and is controlled by the smaller Volume and Tone knobs. This mode is well suited for straight rhythm playing.

Guild thoughtfully provides a manual with detailed diagrams explaining the various switching options. They even printed the names of the various controls on the removable clear plastic film that covers the pickguard, a most welcome feature for those of us who are a bit challenged in this area. Guitarists should spend time getting used to the S-200’s circuitry before gigging it, but once familiar, the electronics make perfect sense. Clearly, this is no one-trick tone pony.

On initial inspection, the sample S-200 exhibited flawless fit and finish and felt solidly built and certainly able to withstand the rigors of gigging. Both body and neck are mahogany. Finish choices are black and three-color Antique Burst.

The guitar is well-balanced sitting or standing, with no neck dive, and the chamfered body cuts on top and back make it extremely comfortable to hold. Some may look with suspicion at the Grover open-back tuners, but they kept the guitar in tune during our tests. Hard chording and bends were no problem, but after some mild dive-bombing of the Hagstrom-style trem, retuning was necessary. The neck is a meaty C shape, which should appeal to a broad spectrum of guitarists, and the rosewood fingerboard features 22 frets with a distinctive asymmetrical headstock.

Plugged in, the S-200, with its two LB-1 Little Bucker pickups proved its versatility, producing sounds suitable for country twang, blues and roots rock, funk, surf and jazz, and even overdriven grind. The LB-1s easily handled anything thrown at them, and never sounded harsh or muffled.

The Guild S-200 T-Bird reissue thankfully lacks one curious feature of the original – the foldout stand in the back. It wasn’t a very good idea in the first place, and it probably resulted in more than a few spills and perhaps even a broken headstock or two.

The Guild S-200 T-Bird does come with a nicely padded gig bag and is a real winner in all respects. It will satisfy guitarists looking to extricate themselves from the “same old-same old.”