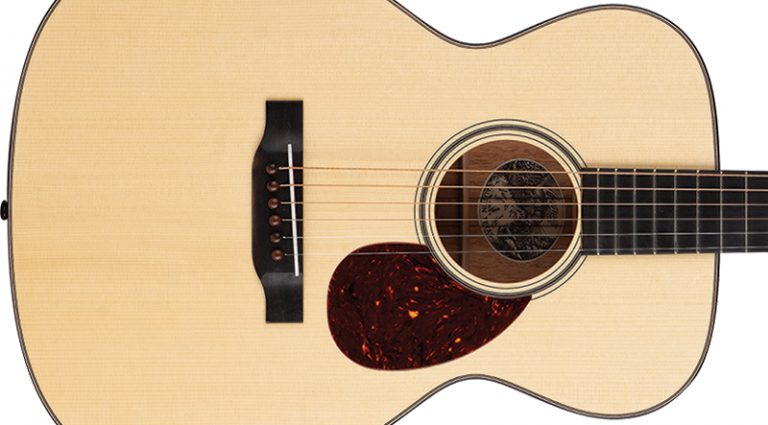 To the hands, hearts, and minds of many an experienced guitarist, an OM-size body with a 25.5″ scale feels the perfect flat-top. Spend time with Collings’ OM1 T, and you’ll likely understand.

How does the new OM1 T differ from previous Collings offerings? Part of the company’s Traditional Series, it represents a return to founder Bill Collings’ roots, with touches like animal protein glue and nitrocellulose-lacquer finishes.

The OM1 T’s body and neck are made of mahogany, while the top is offered in four variations: torrefied and plain Sitka spruce, and torrefied or plain Adirondack spruce. Our review instrument had torrefied Sitka.

The OM1 T’s hardshell case made a good first impression. While it looks like a ’30s case, it’s lighter, stronger, and better balanced.

The OM1 T’s top is impressive. Unlike “aged” tops on most new guitars (which appear more yellow than old), Collings’ torrefied Sitka is similar to cedar, with a straight, sharp grain. The mahogany on the body and neck was also straight and tightly grained. And, the OM1 T arrived tuned almost perfectly to standard concert pitch, which says a lot about its structural stability. Overall fit and finish was typical Collings quality – perfect joints, seams, and edges.

Sonically, our OM1 T was equally remarkable. It did not sound like a new guitar. Compared with a ’30 Martin 000-18, it was equally loud and responsive. While not quite as harmonically complex, it was balanced with enough bass to produce explosive bluegrass bass runs and treble for upper-frequency sparkle on delicate fingerstyle arpeggios.

If you’re looking for a flat-top with balanced, even tone suitable for any style or technique, Collings’ OM1 T could be what you require.