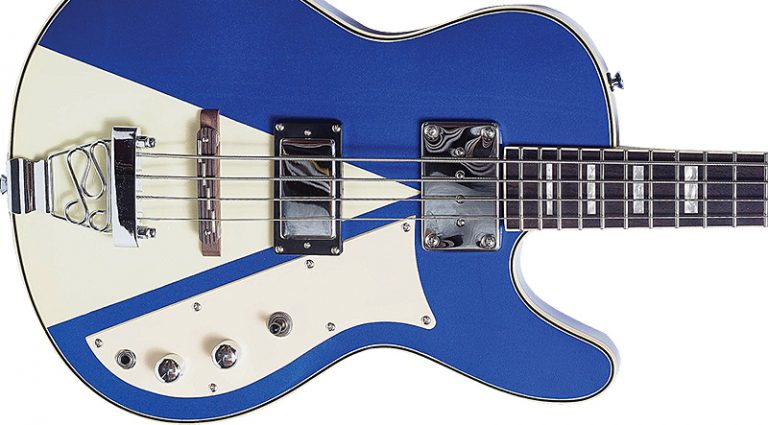 Don’t be confused by the USB in this four-string’s name – there’s no computer-cable hookup. Instead, USB stands for “ultimate short-scale bass” and, indeed, this Musicvox Space Cadet sports a 30″ neck scale in the same ballpark as the Hofner 500/1 or Gibson EB-0 basses of the ’60s.

Why go for a short-scale thud staff? There are several reasons, including the ease of playing a shorter neck for those with smaller hands, as well as the funky vibe and snap that is part and parcel of the shorter scale.

With its looks alone the Space Cadet jumps out of the case, thanks to a blue and ivory body finish and headstock. It’s part retro, part Daytona 500, and all kinda sexy. This solidbody has a single-cutaway mahogany body with a maple neck and rosewood fingerboard fitted with big pearloid inlays and plus-size frets. The neck profile is a wide, shallow D with comfortable shoulders as you head toward the higher frets. The body, neck, and headstock are all bound in a faded-cream binding. And you have to dig the keystone-shaped Musicvox headstock and diminutive pickguard, adding to the art deco appeal.

Hardware includes Musicvox deluxe chrome locking mini-tuners, a trapeze tailpiece, and – another old-school touch – an adjustable rosewood bridge (with compensated saddle inserts). The pickups are a mini-bass humbucker in the bridge and big EB-style single-coil in the neck, both controlled by master Volume and Tone knobs and three-way pickup toggle. The Space Cadet weighs in at roughly 8.75 pounds, making for a very gig-comfy bass.

Plugged in, the Space Cadet is a blast to play. As with most members of the short-scale family, it’s made for jamming and melodic runs. The neck is quick and narrow, making for easy lead lines, while more groove-oriented passages prove easy on the fretting hand. Tone-wise, the neck pickup brings out that nice, deep growl, and the mini bassbucker makes notes pop cleanly. Conversely, leave the toggle on the middle position all night and hear nothing but great tones. Like other short-scales, the Space Cadet USB sounds fabulous with a little fuzz or overdrive on top, guaranteed to bring out your best Jack Bruce, Paul McCartney, and Jack Casady licks.

In all, the Space Cadet USB is a cool short-scale for all sorts of gigging and recording applications. The workmanship is solid, though we did note a few rough fret ends here and there. Otherwise, this Musicvox joins the company’s line of swank, vintage-styled four- and 12-string basses and, similarly, has a knockout finish that will be an attention-grabber onstage. Ya gotta love a short-scale!