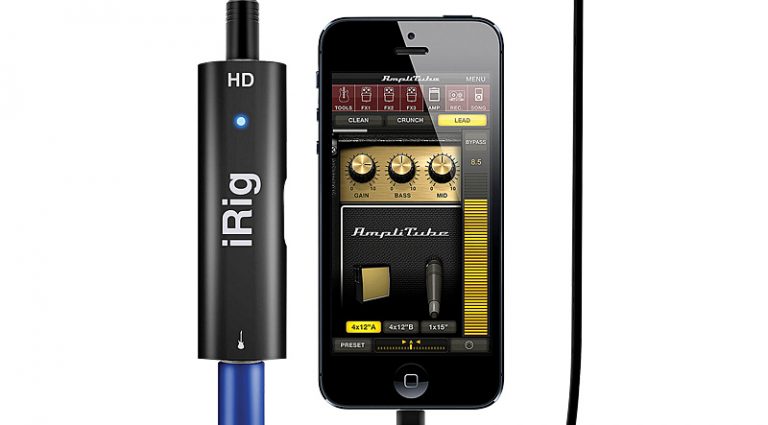 Ain’t technology grand? With a device like the iRig HD, you can plug your guitar into an iPhone, iPad, or a computer and rock out with shockingly good sounds.

The device itself is stone-simple to use and comes with the appropriate cables for phone, tablet, or USB connectivity. Just register the iRig online and download one of the AmpliTube guitar apps or use GarageBand. The guitar plugs into the ¼″ jack on the iRig module; adjust the iRig’s Gain thumb wheel to get the correct level.

At this point, it all becomes very visual. Using your device, finger-tap (or mouse-click) on the desired amp or effect. When you register the product, IK Multimedia offers free apps like the Metal W and Metal 150 amps, Warmonator stompbox (based on the DigiTech Whammy Pedal), and X-Flanger, among others. Beyond those, users can purchase specialty Amplitube apps containing precise models of amplifiers from Fender and Orange, as well as specific models for Jimi Hendrix and Slash. The full version of AmpliTube for iPhone/iPad has a DAW/recorder built into it, plus a four-track looper for practicing on the go. Again, the iRig HD doesn’t contain any sounds of its own – it’s the interface that will get you “into the box” (i.e., your device), where you can access these sound models via apps.

Working on an iMac, we used Apple’s free GarageBand program and, via the iRig, accessed a ton of amps and effects quickly and easily. Within minutes, we had USB connectivity and had set the correct levels via the Gain wheel. Using the array of models, we recorded numerous clean, dirty, and crunch audio clips, all of which demonstrated the studio-quality effects and amp SIMs that IK Multimedia promised – their power and ease of use is incredible. We also ran it through an Apple iPad with equally stellar results.

The audio fidelity of the iRig sports brilliant 24-bit/96kHz analog-to-digital conversion, which by way of comparison is superior to standard 16-bit audio CDs. If you want to kick it up a notch, grab the iRig Pro, a slightly larger (but still portable) unit with a combination XLR jack allowing you to plug in either a studio condenser microphone or your guitar cable. With any of the iRigs, you can record or practice just about anywhere.

Have iRig, will travel.