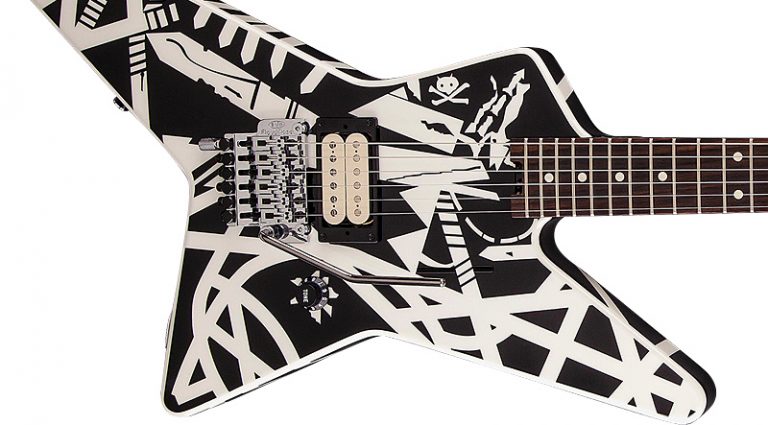 There was time when guitarists waited for new Van Halen records like ferrets on crack. After all, in the early ’80s, Edward Van Halen was a huge deal – a revolutionary upstart who inspired young guitarists to think outside the blues box and diverge from the blues-rock sounds of Nugent, Clapton, and Page. Every new VH album was a lesson in guitar creativity that (bonus!) also happened to showcase memorable songs and ebullient defiance while inevitably provoking the question, “How did he do that?”

Edward Van Halen may no longer light up the sky with cutting-edge guitar techniques, but he’s still active recording, performing, and designing great gear. The EVH Stripe Series Star is a replica of the guitar used on Van Halen’s 1980 World Invasion Tour in support of the band’s third album, Women And Children First. The original was built with a Charvel body, a 21-fret maple Danelectro neck with a rosewood fretboard, Gibson PAF pickup, and an early Floyd Rose and locking nut. The guitar went through a few incarnations before and after its duties on that tour, and it was ultimately disassembled. But no matter – its striking appearance still reverberates with fans.

The EVH Stripe Series Star is a faithful replica with a few minor changes. Its basswood body and gloss finish support a bolt-on/one-piece quartersawn maple neck, rosewood fingerboard, graphite reinforcement, and scarf joint. It has 22 jumbo frets, a compound radius, a hand-rubbed urethane neck finish, and EVH die-cast tuning machines. It’s also equipped with an EVH Wolfgang humbucker in the bridge position, an EVH-branded Floyd Rose with an EVH D-Tuna drop-D tuning system, and a Volume control (as with the original, no Tone knob here).

And the over-the-top Star is no “Madison Square Bedroom” axe. Offering little comfort in a seated position, it kicks serious butt hanging on a strap. Its smooth playability and no-frills ease of use lure the player to commit numerous “Crimes Against Good Taste,” including excessive use of artificial harmonics and unnecessary whammy abuse (throughout which, it should be noted, the Star stays in tune). The humbucker is loud and hot, but malleable, and it produces a no-nonsense rock-and-roll bark that thrives on distortion.

To be sure, the EVH Stripe Series Star isn’t for everyone, but, sonically, it’s more versatile than it looks. Plus, you’ll have a ball playing it – and look cool wearing it.