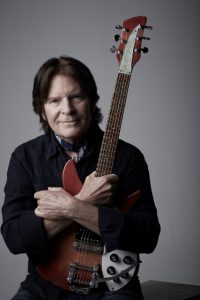 After nearly five decades apart, John Fogerty was recently reunited with the ’69 Rickenbacker 325 he used to write and record legendary Creedence Clearwater Revival songs like “Proud Mary,” “Fortunate Son,” “Green River,” “Travelin’ Band,” “Up Around The Bend,” and “Born on the Bayou.”

Fogerty acquired the guitar in 1968 or ’69, directly from Rickenbacker’s L.A. showroom. He immediately had it modified with a Bigsby and a Gibson PAF pickup, then – in homage to his childhood fondness for Warner Brothers cartoons– painted the word “Acme” in yellow on its headstock plate/truss cover. From that point, he used it to record every standard-tuned CCR song beginning with Bayou Country through the band’s final LP in 1972.

In 1973/’74, with Creedence set to dissolve and having learned he didn’t own publishing rights to his music, Fogerty gave the guitar to a kid who along with a friend had been hanging around the band’s rehearsal space.

It later ended up at Norm’s Rare Guitars in L.A., then at Gary’s Classic Guitars; Fogerty’s wife, Julie, bought it from proprietor Gary Dick in time to present it to Fogerty for Christmas.

Fogerty is using the guitar during his residency at The Wynn Theatre, in Las Vegas, beginning March 3.

Brad Paisley’s forthcoming album will include Fogerty on the title-track, “Love and War,” co-written by the duo. Fogerty is also working on material for a new studio album.