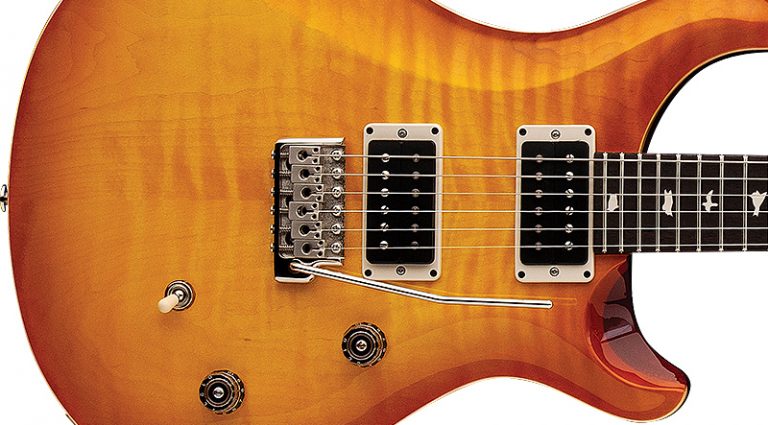 There are gigs where a guitarist needs to cover a vast range of sounds and tones yet yearns to schlep just one 6-string to the show. It might be a pipe dream, but PRS enjoys a challenge and has reissued the venerable CE 24 solidbody to help address this age-old conundrum.

So, can one guitar really cover it all, from crying humbucker tones to bell-like single-coil chime?

Like many Paul Reed Smith models, the CE 24 has a mahogany body with a carved maple top, but it stands out for one simple reason: it has a bolt-on neck. When you grab this guitar’s maple neck and rosewood fingerboard, you can’t help but think of those utilitarian planks that launched rock and roll (this despite PRS’s distinctive 3×3 headstock). Not content to be pigeonholed, PRS ups the ante by giving the instrument a 24-fret fingerboard (with bird inlays, no less) and their popular 25″ neck scale. For hardware, the guitar has a PRS-designed tremolo, nickel hardware, and locking tuners to drastically reduce any tuning issues. To make sure, we sadistically twerked the whammy bar – the CE 24 came up in perfect tune every time.

In the electronics department, the CE 24 has 85/15 treble and bass pickups – designed by Paul Smith himself – as well as a master volume and tone and a three-way switch. Pull the Tone knob and you’ll find a coil-tap. Flip the guitar over and there’s a lightly figured, nitro-finished maple neck, cavity covers, and the four-bolt metal plate affixing the neck to the body. While some PRS instruments have deeper necks, the CE 24 sports their Pattern Thin profile, which is a shallow D shape for fast maneuvering. A critical piece of the puzzle is the neck heel, which has almost nothing to do with either a Les Paul or a Strat. You’d be hard-pressed to find another manufacturer offering a bolt-on with this much upper-fret access. The heel is barely noticeable all the way up to that shimmering high-E note on the 24th fret.

Like any guitar from the Paul Reed Smith factory in Stevensville, Maryland, the neck on the CE 24 is fast and supple with low action and a flawless setup. In fact, if it was anything less than dead-on perfect we’d have been shocked, as dialed-in setups have been PRS’s calling card for 30 years. With expectations satisfied, we were more interested in what the CE 24 felt and sounded like.

Out of the gate, it was apparent that this is a lively solidbody – resonant and punchy with great clarity. Using a variety of tube and digital amps, we plowed through clean, dirty, and crunchy humbucker tones, and the 85/15 pickups proved clear and articulate every time, like fine PAFs.

Deploying the coil tap yielded another revelation. Unlike some taps that deliver a vague single-coil effect while sucking tone and volume, this PRS circuit was full-bodied and right at home in Stratville. Sure, purists won’t give up their Fenders, but the combination of excellent pickup voicing, circuits, and bolt-on maple neck help the CE 24 conjure genuine single-coil tone, from Nashville quack to Austin nasty. We even found Ritchie Blackmore-inspired British metal and it killed.

Ultimately, the CE 24 begs for a test drive, especially by skeptics. This isn’t the first PRS that’s forged a bridge between differing solidbody designs, but it’s also its own animal – a serious professional instrument that can cover all the bases. If you are forced to bring only one guitar to a gig, we can confidently nominate the CE 24 for the job. It’s a formidable piece of American guitar-making.