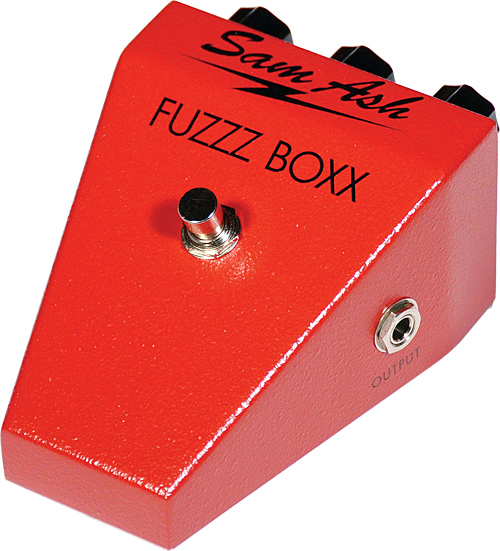 Guitarists who lived in New York City in the late ’60s might recall the Sam Ash Fuzzz Boxx.

Introduced in ’67 as the Astrotone, it was popularized by Tommy Bolin, Leslie West, and Gene Cornish of The Rascals. The following year, it was rebranded and took on its iconic wedge-shaped enclosure. It was one of the first American fuzz pedals to employ a Tone knob, and today a vintage original model can cost more than $500.

Happily, this reissue of the Sam Ash Fuzzz Boxx re-creates the gnarly fuzz from the era of peace and love. A true-bypass pedal, it’s manufactured by Dunlop to the exact specifications of the original, including silicon transistors, that old-school wedge housing, and even the original color. Powered by a 9-volt battery, the Fuzzz Box has no LED or AC adapter option – just like the original.
The Sam Ash Fuzzz Boxx was put to the test with a variety of guitars, a couple of Fender blackface combos, and a Peavey head set up for mild grit. Sure enough, the sounds of the ’60s erupted, prompting an unnatural urge to play “Spirit in the Sky” and “In-A-Gadda-Da-Vida.”

The Fuzzz Boxx’s Input and Output jacks are reversed, and it features three control knobs: The Attack knob controls the amount of fuzz, the Tone knob is the EQ, and the Volume knob adds up to 42dB of volume boost. Running through a clean amp with the pedal’s controls at 12 o’clock provides a classic buzzy tone with a light treble peak. The Fuzzz Boxx has less tonal flexibility than most contemporary fuzz pedals but that’s part of its retro charm. Some tone manipulation increases the low end with a slight bump in volume. The Tone knob is subtle, but the difference can really be heard when it’s maxed in either direction.

Cranking the Attack knob increases saturation, enabling maximum-strength Hendrix. Avoid the harsh ripped-speaker sound by turning the Tone knob all the way clockwise and the Attack and Volume knobs all the way counterclockwise. This setting is great for warmer psychedelic soloing or tight grunge chording. It elicits a warmer bass frequency and tighter clarity up top and also cleans up with a guitar’s volume control a lot nicer than many newer fuzz pedals.

Humbuckers scream and single-coils moan. The Sam Ash Fuzzz Boxx isn’t the most sophisticated fuzz pedal you’ll ever own. It lacks refined tonal complexity, but it has a unique flavor all its own and rules at producing old-school fuzz at an affordable price.