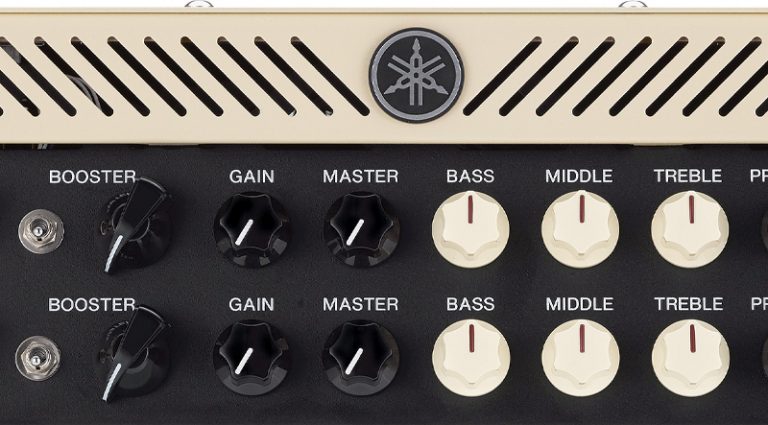 Modeling amps have evolved rapidly as software and circuits have improved and become, dare we say, more organic sounding. The Yamaha THR100HD is a prime example: a digital head that offers tube-based tones in a remarkably flexible unit.

The basic skinny on the THR100HD is that it’s not merely two channels in a single head but rather two completely independent amps in one chassis. Labeled Channel I and Channel II, each amp has separate inputs and outputs that can also be used simultaneously for a standard lead/rhythm setup. The preamp sports five models simulating classic tones: Solid (solid-state), Clean (Fender), Crunch (Vox), Lead (Marshall), and Modern (Rivera-, Boogie-, or Soldano-type saturation). The preamp also provides separate channel and master Volume controls, Presence, a three-band EQ, and footswitchable reverb and boost functions.

A knob in the back allows the player to choose digital models of power tubes like the EL34, EL84, 6V6, KT88, and 6L6GC tubes. A variable output switch offers 25-, 50-, and 100-watt power, a choice between Classic A and Class AB circuit emulations, and an effects loop (though Y cables are required for stereo functionality). A USB output connects to a computer to deeply edit reverbs, boost types, and noise gates, and to upload IR speaker simulations.

All of these features get ramped up when the head is combined with the dedicated THRC212 cabinet, which has two different Eminence speakers. And, each channel can run to a separate speaker, which means the user can set Channel I and Channel II as fully separate rigs, adjusting the amp model, power-tube sim, and speaker choice for each. Two guitarists can even play through the THR100HD head, each using their own amp type, EQ, and speaker. The amp’s versatility also allows the player to have two guitars ready to go at all times. Set up Channel I for a single-coil Strat or Tele, and then dial in Channel II for a humbucker-fitted electric. Onstage, you could simply swap guitars and adjust volumes for two vastly different rigs.

Plugged in, THR100HD delivers convincing amp models and allow massive control over every aspect of your tone. Overall, this won’t replace a favorite vintage-style amp, but considering the huge array of quality sound choices at your fingertips – all in a light, portable head – its immense ramifications quickly become obvious. The Yamaha THR100HD is a tone-tweaker’s delight with a mind-boggling range of gig and studio uses.