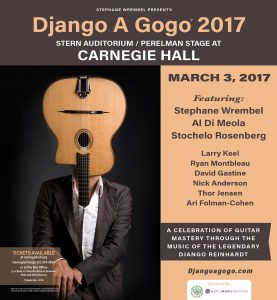 Founded by Wrembel in 2006, Django A Gogo began as an intimate performance at a Brooklyn club, expanded to a larger club in Manhattan, and now runs over several nights in multiple cities. Each year, the concerts cap a week-long music camp that includes instructional classes and evening performances hosted by Wrembel in Maplewood, New Jersey. In 2017, the camp runs February 28 through March 5 and is open to guitarists of all ages and levels interested in learning to play Gypsy jazz in small-group settings and workshops. Instructors perform each night at Woodland Concert Hall. For more, visit djangoagogo.com.