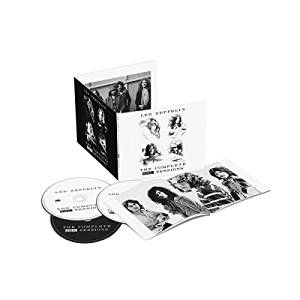 This three-CD set builds on an earlier reissue of Zep recordings for the BBC from 1969 and ’71, adding a third CD of unreleased ’69 tracks. More than 45 years later, it’s still impressive how well BBC engineers managed to capture the sound and fury of early Zeppelin, especially in its scrappy first year.

This new take of “You Shook Me” is a mighty blast of blues-rock, taking the earlier achievements of Cream and the Jeff Beck Group, and making it much, much heavier. Jimmy Page adds boozy slide guitar, while bassist John Paul Jones kills it on the Hammond B3 organ.

You’ll recognize “The Girl I Love, She Got Long Black Wavy Hair” for its central riff, later repurposed for “Moby Dick.” There’s also a descending chord figure that would turn up in “Custard Pie” from Physical Graffiti. A cover of Eddie Cochran’s “Something’s Happening” is garage-band fun, while “Sunshine Woman” is a rollicking blues-boogie right in the Zep wheelhouse.

There’s also an unreleased version of “White Summer/Black Mountain Side,” Jimmy’s east/west-flavored electric jam in DADGAD tuning and, more importantly, a tip of the hat to English fingerstylists like John Renbourn, Davey Graham, and Bert Jansch.

From April 1, 1971, there’s a live Zeppelin recording from London: it’s historically interesting as it presents songs from the band’s vaunted fourth album (aka, Zoso), several months before its release. “Black Dog” sounds weak compared to the earthshaking studio version, but “Heartbreaker” fares better; check out Page’s speed-freaked solo, which pretty much set the bar for shred in its day.

A highpoint is the ’71 acoustic set of “Going To California” and “That’s The Way,” with Page on dreadnought acoustic and Jones on mandolin. Both tracks translated perfectly to the stage, and still demonstrate the light-and-dark dynamic that made Zeppelin so formidable.

Lastly, we hear a new song called “Stairway To Heaven,” with Jimmy delivering his majestic chord arpeggios and epic solo. Keep in mind that few, if anyone, in that London audience had heard this music before. Let that sink in for a second.