Redplate builds boutique amplifiers with point-to-point wiring and meticulous hands-on attention to detail. Their BluesMachine66 1×12 was created for the discerning guitarist with a predilection for British flavors. Its 12AX7 preamp tubes run at 50 watts using KT66 power tubes.

The BluesMachine66 has knobs and switches galore, but the operator’s manual quickly quashes any confusion. The Clean side of the amp has a Bright switch with two separate bright settings and an off position. Gain and Volume chicken knobs adjust the amp’s character and level. A Tone knob adds treble, bass, or a “tone lift” notched to the left; and a Mode selector shifts between two types of “Black,” “Brown,” and “Tweed” sounds. 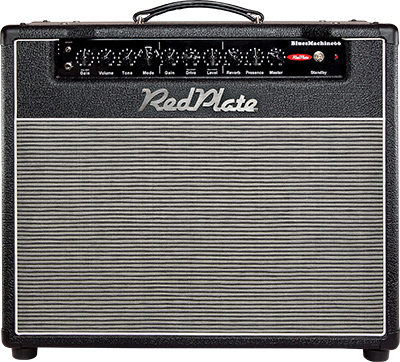 The rear panel has a Pentode/Triode toggle that reduces output by 66 percent, adding sag and compression, and a Fixed/Cathode toggle. This works great for dropping the output for earlier breakup. It also features speaker jacks, line out, send and return for effects, and two voice switches. The Smooth switch engages negative feedback in the clean preamp adding compression, and the Humbucker/Single-Coil switch affects the amount of gain and bass in the input stage. These two switches allow the player to tailor the amp to their guitar. The footswitch controls Tweed, Drive, and Boost.

The BluesMachine66 is a knob twiddler’s dream. Tones range from clear and spanky to fat, fatter, and morbidly obese. The Mode selector’s boosted Tweed setting is highly addictive. The Clean channel, unfortunately, shares the Tone control with the Drive, which makes it impossible to get independent EQ settings. A little patience yielded an unhappy compromise, but the Drive channel produced a wide range of blues-approved cranked-combo sounds with a gritty-but-dark tonal complexion. The Clean channel is where it’s at – much like playing through three awesome classic combos in one convenient package.

Whether you’re into micromanaging every aspect of your sound or just want to switch from funky blackface to tweed on steroids, the BluesMachine66 is pure lushness that will add enviable radiance to your tonal palette.