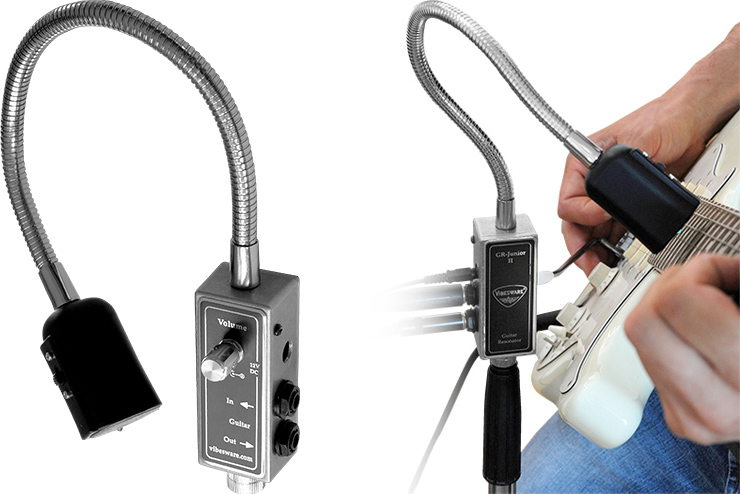 In the beginning, there was the E Bow, a handheld device that used a powered magnet to create infinite sustain and feedback. Then came “sustainer” pickups, which were mounted internally on a solidbody – also cool, but you lost your neck pickup slot.

Now Germany’s Vibesware offers a unique solution with the GR-Junior II, a new installment in their Guitar Resonator series.

The concept behind the GR-Junior II is simple. Like an E Bow, it creates an electrically powered magnetic field that causes guitar strings to create infinite sustain and harmonic feedback. The twist here is that Vibesware’s unit mounts on a mic stand for hands-free operation. Another bonus is that it runs on an external power supply, so no more battery-swapping.

These features offer obvious advantages. First, you no longer have to hold a device in your hand – just move your guitar close to the GR-Junior II and the device will create a sustained signal or feedback harmonics, leaving your hands free to pick as normal. Secondly, the power of the magnetic field offers extensive string vibrations and harmonics, even on bass strings.

The unit works like a regular stompbox: just plug your guitar into the Input and run the Output to your amplifier or other pedals. To get the GR-Junior II to engage, position the resonator head roughly around the twelfth fret, perfectly perpendicular to the strings. Like an E Bow, it needs to be in proximity to the strings, but there’s a volume control on the GR-Junior II’s base section, so you can control that distance. A blue light on the unit’s head glows more intensely as the signal gets stronger, more dimly as you move the guitar away.

In practice, the GR-Junior II worked just as one would hope, creating sustain like Robert Fripp’s on Bowie’s “Heroes,” as well as achieving Carlos-Santana-like feedback effects. Another plus is that you can grab an entire chord and sustain it, which is impossible with an E Bow. Or move the resonator head to different spots on the fingerboard to trigger different overtones and harmonics. There’s even a Phase switch on the head to emphasize octave harmonics (the company also offers the pedal-controlled GR-1).

In all, the Vibesware GR-Junior II does exactly as advertised while offering a great new spin on a classic guitar effect.