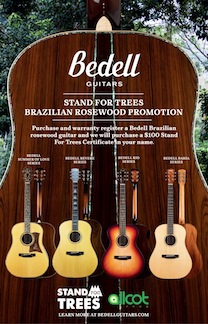 In an effort to protect a threatened Brazilian rosewood forest, Bedell Guitars has partnered with Stand For Trees and the Allcot Group’s Brazilian Rosewood Amazon Conversation project.

Stand For Trees helps citizens and businesses protect endangered forests. For each Brazilian Rosewood guitar the builder sells, it will buy 10 Stand For Trees certificates to support conservation efforts in Pará, Brazil, where the Brazilian Rosewood Project works to protect the area’s ecosystem by stopping deforestation. The organization says each certificate helps keep a specific forest standing and prevents a ton of CO2 from entering the earth’s atmosphere.

“Bedell Guitars recognizes the rareness of this revered tonewood,” said Tom Bedell, founder Bedell Guitars. “Though the Brazilian rosewood we use for our guitars was harvested legally, Bedell wants to go further to support conservation practices in the area.”