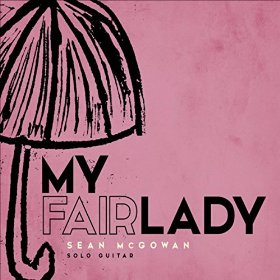 Exploring the possibilities of solo jazz guitar, recording with no overdubs, McGowan achieves a warm, intimate tone from his Brad Nickerson Solstice, as he mines the rich potential of Lerner and Loewe classics from this memorable play and movie. The uptempo “I’m Getting Married In The Morning” kicks things off, with an ostinato bass set against the familiar melody, giving the impression of two guitarists. McGowan even “gives the bass man some,” with a walking solo before “the guitarist” takes off on a single-note flight, bringing Joe Pass’ Virtuoso albums to mind.

“On The Street Where You Live” gets a swinging, medium-tempo, finger-snapping groove; “The Rain In Spain” detours to the Caribbean, even sporting a hint of ska; and “I’ve Grown Accustomed To Her Face” is the type of ballad you can get lost in.
If this is your introduction to McGowan, you’ll likely catch up on his back catalog and anxiously await his next outing.