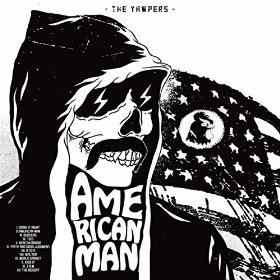 Fans of four-barrel, huevos-to-the-wall roots rock will do well to investigate the latest from this Denver-based trio.

Cook’s narrator in “Burdens” is accompanied by Libba Cotten fingerpicking as the song builds and finally crashes in a cacophony recalling Uncle Tupelo at their early best. Which is apt – Cook paints wry pictures of dead-end smalltown life as well as the alt-country figureheads ever did.

Meanwhile, the title track’s riff gives off a sniff of Neil Young’s “Homegrown” while offering killer lines like “Livin’ my life with my head in the sand/Praise the Lord, I’m an American man.”

All the sonic tropes of loud white-trash rock are here, right down to Cook’s Gene Vincent yelps on “Doing It Right,” but the listener doesn’t need to look far to find an empathetic songwriter and tunes as complex as middle America itself.

This article originally appeared in VG‘s February’16 issue. All copyrights are by the author and Vintage Guitar magazine. Unauthorized replication or use is strictly prohibited.