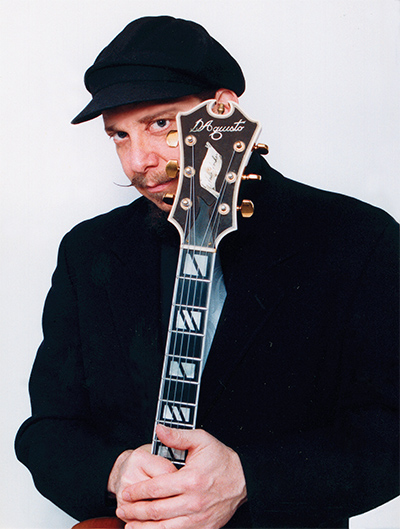 The latest album from guitarist Mark Elf shot to the top of the jazz charts, but the route to success for Mark Elf Returns 2014 wasn’t so easy.

“I was supposed to record in December of 2012, but Superstorm Sandy hit; my house and many others were flooded. I lost everything on the first floor and spent eight or nine months fixing it.”

Post-clean-up, Elf turned to Kickstarter to raise money for the album. “I’ve done most of my dates like that; I don’t want to entrust my recordings or give my masters to anyone. They’re too valuable. I keep my publishing, my masters – everything.”

Elf spent the first 10 years of his life in New York, seven in California, then moved back. He got the guitar bug as a teen; for his 13th birthday, he was given a Kay.

“I put a pickup on it and turned my dad’s Grundig short-wave radio into an amplifier, which he did not appreciate,” he said.

After playing in rock bands, he started working in a music store, which led to lessons with jazz stalwarts Chuck Wayne and Barry Galbraith. At 17, he knew he wanted to make his living as a jazz guitarist.

“I started going to a club where Billy Mitchell, the tenor-sax player in Basie’s band, had a Thursday-night gig. I sat in, and was getting exposed to all these good players coming through. That’s where it really started. Billy would take me to other gigs. It was the best ‘school’ I could go to.”

Frustration with airlines led Elf to the guitars he now plays. “When I was touring, it got almost impossible to take my D’Aquisto with me because the airlines started cracking down. I remember times I actually had to buy a separate ticket for my guitar.” A chance meeting with luthier James DeCava solved his problem. “I told him I was looking to find someone to build an instrument I’d endorse and could take on the road. He built one that became my road guitar, and recently built another for me. They’re basically knock-offs of my D’Aquisto; I didn’t want to reinvent the wheel or feel like I was playing a different instrument. He calls it the Mark Elf Custom Classic.”

Elf’s favorite amp is a Polytone Mini-Brute II he bought as a replacement for another he accidentally left on a street corner. “I realized I had left it sitting there, and by the time I drove around the block, it was gone!” In studio, he also uses a Fender Concert, citing its clean sound.

Guitar education is important to Elf, and serves as the primary purpose for his website. “I spent five years shooting and editing more than 650 tutorial videos, and I have chats with students from all over the world. It’s for jazz guitarists at all levels, and a nice way to help spread the music that was so generously shared with me when I was younger.”