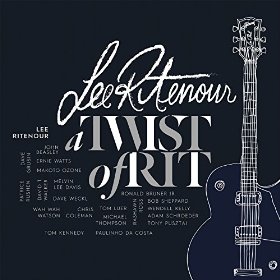 In honor of his 40th year of recording, Lee Ritenour blended a bit of new material with journeys in time, revisiting tunes he’d recorded starting with First Course, his 1975 debut. He kicks off with “Wild Rice” and “Fatback” from early in his career, approaching “Rice” much as he did before, though this version feels more expansive. The same applies to “Fatback,” again close to the original. “A Little Bit Of This,” also from his first outing, has a slightly more deliberate edge.

The three new performances here are the strongest. The title song is a heavier production, like some of the remakes, but his lines are straight ahead. “Pearl,” Ritenour’s moving tribute to his mother, has a light, ingratiating melody that, blended with the austere production, feels fresh and nicely understated.

The aggressive “W.O.R.K.’n It,” where he plays off Makoto Ozone’s equally powerful Hammond organ, stands as another highpoint.

Ritenour’s work here is characteristically flawless. His lack of a fresher approach to the older tunes, however, leaves one wondering what might have been.