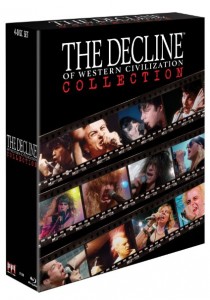 Was the Germs’ incoherent Darby Crash, writhing on stage while fans write on his forehead with indelible marker, really so different from W.A.S.P.’s incoherent Chris Holmes, floating in his pool and chugging three bottles of Smirnoff as his Mom looked on?

Tough to say, but filmmaker Penelope Spheeris had the distinction of capturing both in her legendary docs. Heretofore unavailable on DVD, both are remastered to high-def for this new box that throws in Part III covering L.A. gutterpunks.

Part I from 1981 was shocking at the time for infiltrating the SoCal punk scene. Viewers get on- and offstage tastes of the Germs, X, and pre-Rollins Black Flag. Highlights, though, are performance clips of Circle Jerks and the audience-baiting Fear.

Part II from ’87 examines the period’s Strip (mostly hair) metal scene. Interviews with Ozzy, Lemmy, a charmingly self-deprecating Poison, and Dave Mustaine nearly offset the likes of Faster Pussycat, London, and a nearly unlistenable Odin, all of whom are so buffoonish as to make the film at times seem exploitative (and thus all the more entertaining).

Viewed together, the docs remind us that perhaps the divide between punk and metal isn’t so vast. Fantastic extras include deleted scenes and commentary by Dave Grohl.

The Lucky Tomblin Band – In a Honky-Tonk Mood