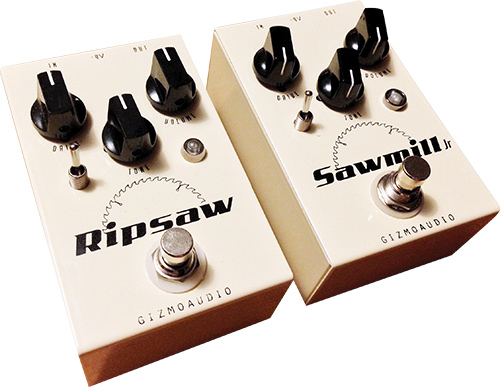 Most guitar players’ first pedal was a distortion/OD, often acquired after enduring the taunts from friends and/or bandmates who whisper about how their tone was “thin” and “weak.”

The experience takes them down the road to experimentation; the weeks and years that follow becoming a haze where dozens of OD and distortion pedals meld with countless variations of guitars, pickups, and amps, all leading to the conclusion that OD/distortion pedals can do one of two things – make an amp/guitar rig realize its full potential, or cover its shortcomings. Happily, two new OD pedals from GizmoAudio do the former.

The Sawmill Jr. is a very clean, “medium-light” Mosfet-based overdrive that delivers pristine tones that flatter an amp and guitar. The Ripsaw is similar, but with higher-gain distortion. Both are blessed with intuitive (and identical) controls; Drive, Volume, and low-pass/post-distortion Tone pots, a switchable pre-distortion high-pass filter, and a true-bypass stomp switch. Both run on 9-volt wall warts, only (battery power is not an option).

The philosophy of GizmoAudio’s Charles Luke is evident in both: pedals should enhance playing dynamics, just like amps, providing gentle coloration that lets the guitar and amp shine. For both the Ripsaw and Sawmill Jr., the transition between clean and distorted tones is gradual and changes with string attack. Even with the drive turned full up, the tonal qualities of amp and pickup are clearly identifiable, and at any setting, distortion increases as the strings are plucked harder – responding just like a nice tube amp. The Sawmill Jr. has patented circuitry for canceling nonmusical modulations and providing clean, responsive boost. And while not patented, the Ripsaw is nonetheless an original design. These pedals are not mere clones.

In front of several amps and using a range of guitars, both pedals offered impressive clarity and attack response, particularly with a Stratocaster into a Deluxe Reverb; the Strat retained its signature “quack” at any pedal setting. Humbuckers in a Les Paul seemed to highlight the greatest contrast between the Ripsaw’s higher gain and the Sawmill Jr.’s lighter overdrive, but, generally, it was difficult to identify significant tonal differences between the two. Maybe that’s a good thing when choosing between these two superb pedals, both of which deliver what’s promised – tonal bliss.

This article originally appeared in VG April 2015 issue. All copyrights are by the author and Vintage Guitar magazine. Unauthorized replication or use is strictly prohibited.