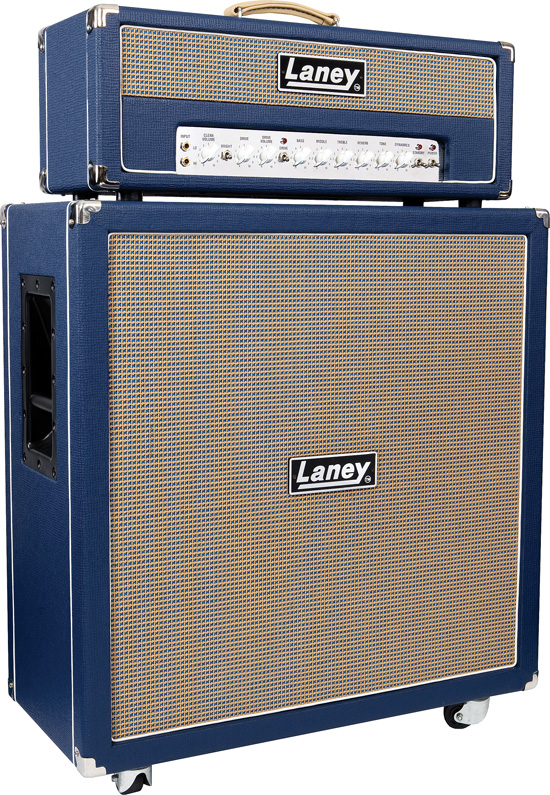 Lyndon Laney is no stranger to fans of the iconic British stack. Established in 1967, Laney Amplification found its early fame thanks to Tony Iommi’s commanding use of the company’s amps with Black Sabbath. Following the reign of Sabbath, they became an amplifier of choice for the new generation of shredders making their mark in the ’80s and ’90s, while in the past decade, Laney widened its reach with cleaner, lower-wattage combos that appealed to a wider range of players.

Laney offered to let us take a look at their Lionheart head, an amp that blends ’50s-style, single-ended design with enough power to fill the volume requirements of the modern gigging musician.

The L50H head is a 50-watt design and, to accomplish this circuit, R&D director David Hirons took five EL34 tubes and wired them in parallel to produce 10 watts output per tube. To handle the power required by five EL34 tubes perpetually burning at full idle, the amp required a hefty toroidal transformer and oversized power supply that would normally be seen in amps of much higher wattage. On the front panel, the amp has High/Lo inputs as well as controls for Clean Volume, Drive, Drive Volume, Bass, Middle, Treble, Reverb, Tone (power section), and Dynamics, along with switches for Bite, Drive, Standby, and Power. The rear panel holds inputs for a footswitch (channel switch/reverb), send/return jacks (effects loop), and twin speaker outputs with a selector switch for 8 or 16 ohms. The matching L412 cab has four 12″ Celestion G12 Heritage speakers and can handle 120 watts of input. Both head and cab are covered in blue vinyl with basketweave grilles. Amp and cab are built in the U.K.

For testing the Lionheart stack, we used a Les Paul and a ’67 Telecaster. Plugging in, we easily dialed in a pleasing clean tone with a touch of reverb. Clean tones were smooth, with just the right amount of midrange bark. Tweaking a few knobs and switches revealed nice shelving of each EQ knob, and we were downright enamored with the Dynamics control, which added plumpness without becoming flabby like a standard bass control might; it was like a low-end Presence that could make even the bridge pickup on our Tele sound robust yet retain its twang. Between this and power amp’s Tone knob, we could master each guitar’s persona after shaping the basic tones using the Treble, Middle, and Bass controls.

Turning up the reverb, the circuit is more subtle than your typical Fender design, and excels at giving the amp more breath, but will never go surfing. Flipping the Drive switch and turning up the corresponding Drive Volume, one is struck by the immediacy of the sound and its touch response. This was revealed somewhat in the clean channel, but here, it’s front-and-center as the single-ended power section begins to show its stripes. Notes seemed wider and sustain seemed longer than usual than other 50-watt amps at similar dirt levels. Turning up the gain with the Les Paul plugged into the high input, we were blessed with the high-gain tones one might expect from a Laney. But, even at higher gain settings, the Lionheart retained its “vintage” nature (a player looking for a more-compressed ’80s heavy metal tone might need a very-high-output pickup or high-gain distortion pedal). We were quite pleased with the amp and certainly with the supplied 4×12 cab too.

The L412 had much to contribute to the Lionheart’s tone, thanks to a well-tuned cab with four Celestion G12H30 speakers.

Together, the Laney L50H Lionheart and L412 make a wonderful, unique-sounding stage rig – versatile, and great at shaping tone. Plus, its responsiveness and ability to gradually transition from clean to dirty are especially impressive.