Formed in ’79, the Tomcats – singer/guitarist Brian Setzer, drummer Slim Jim Phantom, and bassist Lee Rocker – had only marginal success playing rockabilly at punk clubs like Manhattan’s CBGB. Reasoning that they’d find a bigger audience in England, they sold their instruments to get enough cash for one-way tickets to London. The gamble paid off, and the renamed Stray Cats were a sensation.

This previously unreleased double-CD/DVD combo features two televised concerts in Germany, in ’81 and ’83. By the time of the first one, they’d teamed with producer Dave Edmunds to record a self-titled debut that launched three hit singles. The packed audience was primed, as was the Rockpalast staff, who gave the stage a motif of a graffitied brick wall.

The trappings perfectly suited the band’s look, since they were essentially a cartoon version of how they envisioned ’50s rockabilly acts – to a much greater extent than neo-rockabilly acts that preceded them, like Robert Gordon, Rockpile, or the Blasters. (You’d be hard-pressed to find a ’50s artist sporting a six-inch pompadour and tattooed “sleeves.”) 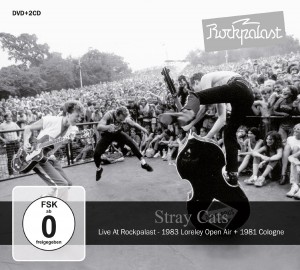 Likewise, aforementioned hits “Rock This Town” and “Stray Cat Strut” were rockabilly light and tailor-made for video, respectively. Fortunately, though, the band’s chops and research went much deeper.

At the time of the ’81 show, Setzer was 22 – already a commanding presence and guitarist to be reckoned with. The repertoire is a mix of originals and covers, like Eddie Cochran’s “Somethin’ Else” and Warren Smith’s “Ubangi Stomp,” given a quasi-ska treatment. The latter features plenty of dazzling Setzer fretwork on his ’59 Gretsch 6120.

Backed only by upright bass and minimal drum kit, a lot rides on Setzer’s shoulders. Rocker spells him on vocals for “Drink That Bottle Down,” a slow blues featuring left-hand close-ups that amount to a bonus Setzer lesson. “Storm The Embassy” illustrates the connection between neo-rockabilly and punk – less than a stone’s throw from the Clash, musically and politically.

By the time of the outdoor ’83 concert, the band was enjoying success in their homeland and were including songs from their Rant N’ Rave album, like “Look At That Cadillac” and another hit, “She’s Sexy And 17.” Setzer originals bookend covers of the Johnny Burnette Rock and Roll Trio’s “Baby Blue Eyes” and “Tear It Up.” Edmunds joins on the latter before singing George Jones’ “The Race Is On.” For “Foggy Mountain Breakdown,” Setzer grabs an electrified banjo, employing the same technique of tucking the flatpick under his index that’s a major component of his guitar playing.

By the time of the last encores, Buddy Holly’s “Oh Boy” and the inevitable “Rock This Town,” the trio is stripped to the waist and as drenched in sweat as the sardine-packed audience. With Rocker scaling his upright, Phantom standing on his kick drum, and Setzer leaping offstage, quickly joined by a half-dozen jive-dancing males, one thing is clear: These Cats gave you your money’s worth.