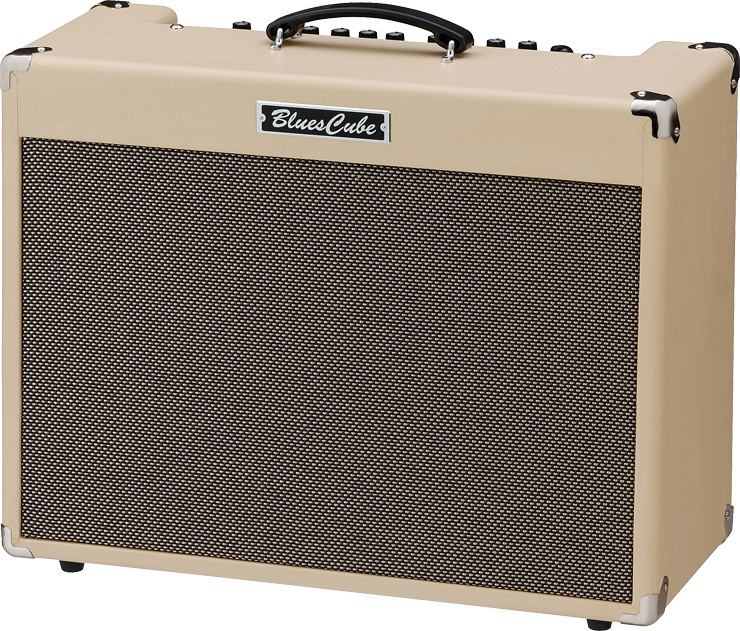 We checked out the Blues Cube Artist with a Fender Custom Shop 1960 Reissue Strat loaded with a trio of Custom Shop single-coils and a PRS SC 245 with 57/08 humbuckers.

The Clean channel exhibited a very crisp, slightly scooped-out Fender-ish sound with tons of head room and tube-like overtones. The Tone switch for the Clean channel worked much like a typical Bright switch, adding clarity to the PRS’s humbuckers. The Crunch channel’s tone was surprisingly thick with a very tweed-like overdrive/distortion. Like a tube amp, the front end cleaned up nicely by simply rolling back the volume on the guitar or by laying off the pick attack. The Dual Tone channel switch, which engages both channels at once, allowed simultaneous clean and overdrive sounds with very fat results. As we dialed back the output power via the Power control we not only decreased the amp’s overall volume but got a bit of tube-like “sag” or compression, adding to the vintage response and sound. The onboard digital reverb circuit had a clean tone and retained the warmth of a genuine spring reverb without sounding too digital. The tremolo circuit features a backlit tempo switch that pulses to tremolo speed. The tremolo itself proved not too choppy and did not kill the amp’s overall volume.

While the Roland Blues Cube Artist definitely fulfills its namesake with great blues tone, its clean and crunch channels and quality onboard effects make it a great choice for a variety of styles.