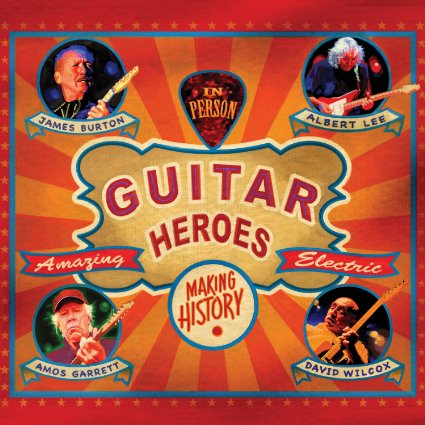 Recorded live in 2013, this album is exactly what you’d think given the players: an onslaught of guitar playing that would make even the most cynical music fan smile. All four players are featured in a set of songs that have been around forever.

The opener, “That’s Alright, Mama,” pretty much sets the table. All the pickers take turns, some playing off the original Scotty Moore work on Elvis’ version, others throwing in twangy notes and crazy bends that redefine the classic.

That’s the formula, and it works for most of this record. It’s not an exaggeration to say that each and every solo has something to offer to anyone interested in expanding their horizon.

Highlights of note include Amos Garrett’s stunning take on “Sleep Walk.” Fans of his classic “Midnight At The Oasis” solo will appreciate his creative playing here.

Albert Lee kills on his “Country Boy.” James Burton’s great on the melodic “Only The Young.” And David Wilcox makes it jazzy on the minor key “Comin’ Home Baby.”

There are vocals too, but you hardly notice – you’re basically just waiting for the next dazzling guitar solo.