- Advertisement -
Home Classic Instruments The Roland Space Echo
When Brian Setzer kickstarted the Stray Cats into action in 1979, his gear lineup was a hodgepodge of orthodox rockabilly ware along with the bizarre. His ’59 Gretsch 6120 and his pomade were the real deal. But he played through a Vox AC50 Royal Guardsman because the band was first recording in England.

To get that all-important slap-back to emulate the Sun Studios sound, he eventually settled on a Japanese-built Roland Space Echo.

Setzer’s search for proper slapback was a long, winding road. He never bothered with an Ecco-Fonic; even back then, they were vintage units and a chore to keep functioning. He tinkered with Echoplexes, but was always frustrated.

“The Echoplex is just so damn unreliable,” he says. “I mean, if you give it a dirty look, it’ll say, ‘Screw it, I’m not working for you today.’ They’re just so timid. You’d bring it to a gig and it wouldn’t work.”

He also experimented with analog stompboxes, but the tone was lacking. The lesson from all his trials was that he realized, “I love the tape sound.”

“Then I discovered the Roland,” he says. “The Space Echoes are sturdy and they sound exactly the same as the Echoplex – and you actually have more of a choice in the echo, if you want it. The Roland has always done me well.”

Even now, when analog and digital delays are prolific, reliable, and inexpensive, Setzer tours the world with a pair of vintage Roland RE-301 units sitting proudly atop his blond piggyback Bassmans.

The Space Echo was the creation of Ikutaro Kakehashi. A self-taught watch repairman who progressed to radio servicing and eventually, electrical engineering. Through it all, he was fascinated by music; he even titled his autobiography, I Believe in Music.

Kakehashi took a classically Japanese approach to refining the tape-echo effect. He didn’t invent tape echo – no one knows for certain who did – perhaps Les Paul, perhaps Sam Philips at Sun, perhaps some other mad sonic scientist. But Kakehashi did take a delicate, untrustworthy technology and refined it into an effect that was reliable, robust, and roadworthy.

The roots of the Space Echo stretch back to Ace Electronic Industries, founded in 1960 by Kakehashi. In the late ’60s, the firm offered the solidstate Ace Tone EC-1 Echo Chamber, followed by various subsequent models. The EC-1 was basically similar to its famed predecessors, the Ecco-Fonic and Echoplex, albeit with more-modern controls – and simply more of them.

But like the Ecco-Fonic and other early echo units such as the English Watkins Copicat, the short-lived Ace Tone used just a basic, short 1/4″ tape loop. It didn’t even borrow the updated (and much more reliable) tape-cartridge concept of the Echoplex.

In 1972, Kakehashi launched the Roland Corporation, and in ’73 introduced the Roland Echo Chamber RE-100 and RE-200 (with added spring reverb). As with the Ace Tone, those first Rolands still used that short tape loop. And, the design of the controls and housing were dead-ringers.

Just a year later, Roland unveiled replacement models with a key revision; instead of the short tape loop, the new RE-101 and RE-201 Space Echoes had a free-running tape-transport system. The longer tape loop spooled freely within a chamber, with no reels of any kind, just a capstan drive protected by a plastic cover. The loose-spool/low-tension design resulted in less tape wear and minimized noise, wow, and flutter.

Compared with the bare-bones controls of an Ecco-Fonic or Echoplex, the control panel of an RE-201 looked like a jet-airplane cockpit. It had inputs for multiple sound sources – two mics and an instrument (each with independent level controls; the instrument input offering a standby on-off toggle switch), and a mixer or P.A.

Controls included Bass and Treble to EQ the effect output (not the dry signal), Repeat Rate (echo length), Intensity (number of echo repeats), and separate Volume knobs for echo and reverb that determine the mix level of dry and effect signal.

In the panel center, the Rolands had a trademark Mode Selector rotary knob with multiple presets. The RE-201 had 11 presets – four for Repeat, seven for Reverb Echo, plus a preset for spring-reverb only. This knob controlled the unit’s single record head, three separate playback heads, and variable-speed motor.

The Space Echo was an instant, runaway hit. Unlike any previous tape echo, it was reliable and sturdy enough to travel. Musicians like Setzer could dial in a simple slapback, whereas Bob Marley’s band used it for deep, throbbing echoes. Either way, the sound was warm, rich, and organic. Portishead and Radiohead would take Space Echoes to new extremes; by juggling the controls and tape speed as well as looping recordings, musicians could create pitch-shifting and oscillated effects.

The RE-101 and RE-201 were followed by the RE-150, which differed from the RE-101 in having two playback heads, different controls, and two outputs. The RE-301 Chorus Echo was added in 1977 with sound-on-sound loop recording and Roland’s famous analog chorus circuitry. The RE-501 and rackmount SRE-555 arrived in 1980 with new livery, chorus, and dual outputs.

Still, the RE-201 was such a popular workhorse it remained in production until 1990, even while these newer, updated models were introduced. In 2010, Roland’s guitar-effects subsidiary, Boss, created a digital-modeling version of the Space Echo called the RE-20. 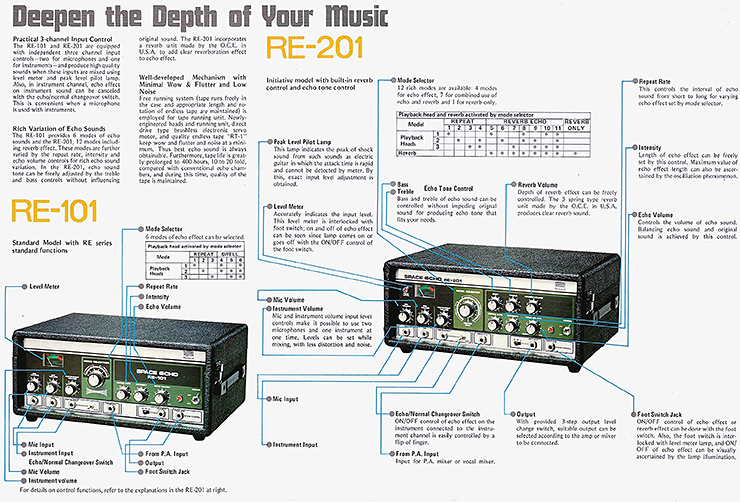