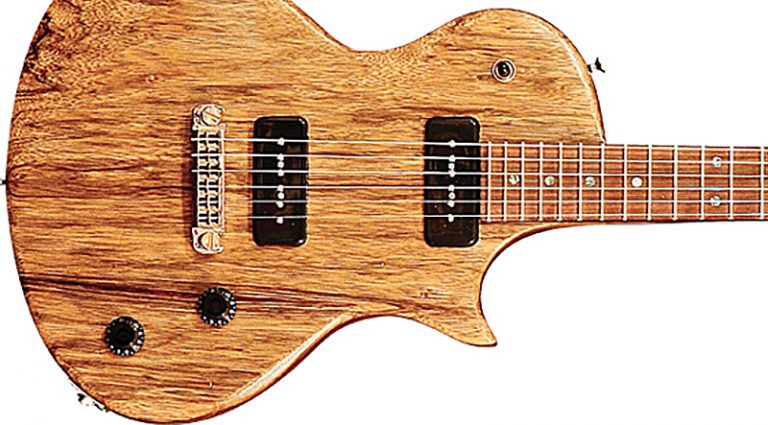 Roger Mello of SeaGlass Guitars officially opened shop in 2011. Today, he offers four electric models; his Route6jr maintains the simplicity of the guitars that inspired it while re-creating their classic features in a high-end, handcrafted solidbody.

The Route6jr’s set-neck, lightweight design will feel familiar to those fond of a Les Paul Special and/or Junior, with its 22-fret, 25.5″-scale neck and Indian rosewood fretboard. SeaGlass offers two choices of wood for the Route6jr; black limba (korina heartwood) and mahogany. Generally, the tonal differences between these two woods are described as mahogany being denser and carrying more low end, while the black limba has more pronounced, musical upper mids. Some luthiers refer to black limba having more snarl compared to mahogany’s more growly nature when amplified and pushed.

The Route6jr as reviewed was made of black limba. Even unplugged, the notes sustained and opened up differently than what is common with a mahogany guitar; it was clearly a tonally balanced and very well crafted instrument. The finish was hand-rubbed oil and the whole feel and first impression was of simplicity and self-confidence. The 111/16″ bone nut sat perfectly and the strings resonated well through the medium-thick set-neck, right down to the TonePros wraparound bridge.

In classic fashion, the electronics layout of the Route6jr is simple; two P-90s, Volume and Tone knobs, and a three-way switch. All the neatly routed spaces for the electronics are covered in shielding paint, though the control cavity feels a little generous, the extra routing keeps the weight down (the guitar reviewed weighed in a little under 6.5 pounds).

The Lollar P-90s are a great match for the build. They have a very controlled high end and sound beefier than most P-90s due to being scatter-wound. With their Alnico V magnets, the outputs measure at 8.2k for the neck and 9.1k for the bridge pickup. A common advantage to slightly hotter pickups is the option of extended volume range when using dynamic picking techniques. Start soft, and you have somewhere to go when you want to get your amp to break up.

Starting in the neck position it was easy to dial in some really nice cleans. Rolling off the tone control produced jazzy sounds not usually associated with this type of guitar. It’s a full-spectrum mellow paired with blooming sustain and definition. There are blues in there, too; not your glassy, neck-pickup Hendrix or Stevie Ray sound, but darker and beefier.

In the middle position the Route6jr is in-your-face, rich and full. This is a nice place to hang out for palm-muted single-string licks or get some great sounds for chords and rhythm playing. And because it has a larger neck radius, this guitar lends itself nicely to slide playing. With both pickups engaged into an amp that is breaking up, slide tones feel really vocal in timbre.

Backing off some of the breakup on the amp and switching to the bridge pickup shows how well balanced the Lollar P-90s are. Out of the case, the setup is great and the pickups adjusted to their optimum performance. Cleaning up the amp setting a bit produced a great spank out of the bridge pickup with some faster strumming patterns. It holds a pleasant high end but doesn’t tip over into being spiky or too trebly. The bridge pickup also has some great lead tones when played through a pushed amp; slightly more attitude than a humbucker but fuller and punchier then what is normally associated with a single-coil. And it holds up really well in the land of big distortion. Of course, what these pickups are translating is how the strings resonate through these well-selected and crafted pieces of wood. Overall, the Lollars are top-notch and feel like a perfect match for this guitar.

The Route6jr is a truly noble instrument, exhibiting excellent craftsmanship and top-end componentry. But it also offers plenty of grit and workhorse stamina – light but solid for live playing, and also full of range and tonal capacity for all-around studio work.