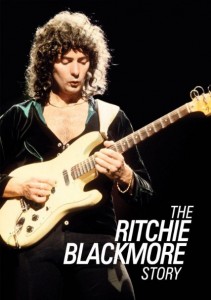 This rockumentary delves into the career of the enigmatic Deep Purple guitar hero, from his early ’60s session work through Deep Purple, Rainbow, and recent work with Blackmore’s Night. Beer in hand, Ritchie is interviewed extensively, offering his typically dour, but amusing takes on the early days of Purp and the development of his proto-shred guitar style. Brian May, Steve Lukather, Ian Anderson, Steve Vai and Joe Satriani add insights into the formidable Blackmore mystique and temperament, most of them in awe of his chops and fretboard fury.

One of the frequent themes is how the guitarist is barely known beyond the hard-rock community, something partially attributable to Blackmore’s departure from Deep Purple and Rainbow some 20 years ago. Despite his influence over the decades, Ritchie is rarely named in the same company as a Page, Iommi, or Beck, which is an injustice, certainly.

One glaring downfall here is the lack of accompanying concert video; this is a very “talky” documentary without much rare or inspiring footage. Further, the Man in Black himself is a rather glum interview subject, which hardly propels the narrative along. The fatal flaw is that we hear about the Deep Purple era from a purely Blackmorean perspective, without enough input from the other key members of the band.

Where great rockumentaries like Muscle Shoals and The Wrecking Crew inspire and move us, this is a collection of low-key, fawning interviews – and ultimately, a rather boring one for anyone but his biggest fans.