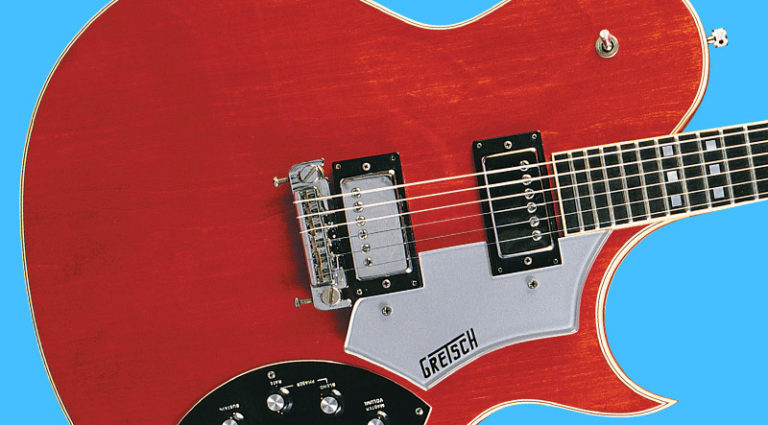 Most of us are – or should be – aware of the enormous contributions of the late Chet Atkins, the Country Gentleman, to American popular music, from his complex fingerpicking style to producing early rock records. Not to mention the classic Gretsch hollowbody electric guitars that bore his name.

But far fewer know how his quest for sustain yielded two of the more obscure Gretsches of the 1970s – the Super Axe and its humbler sibling, the Atkins Axe. Or that Roy Clark almost got the credit!

The Super Axe was a product of the Baldwin era of ownership at Gretsch. The Super Axe was actually designed circa 1976 by Gretsch manager Duke Kramer in collaboration with Atkins, who recalls that Atkins was always investigating ways to increase sustain in instruments, from modifying bracing to experimenting with glass nuts.

Built in Arkansas, the Gretsch Super Axe was a fine guitar. A solidbody (for sustain!), it had a glued-in neck and a very slim, bound mahogany body that tapered toward the edges, making it very comfortable to play. These guitars were fairly wide for a solidbody, closer to a hollowbody, probably reflecting Chet’s preferences for that mode. The S-curve shape of the upper bout and cutaway was similar to other designs popular in the mid ’70s, including the Aria Pro II Prototype, and ultimately derived from the Rickenbacker Combo designed by Roger Rossmeisl. The bound ebony fingerboard had cool triple-block inlays. The pickups on Gretsch guitars by this time were produced in Japan, and they kick butt. The guitars came in two transparent finishes, orange and gray. 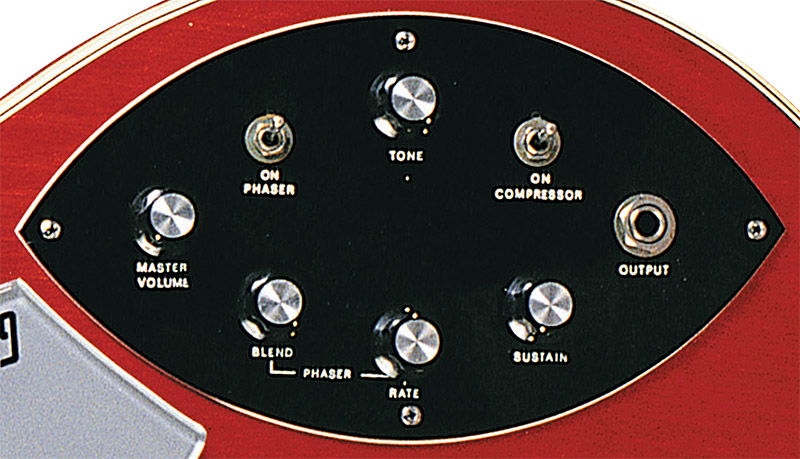 At the heart of the Super Axe concept was a built-in effects circuit. Atkins preferred just two. In addition to master volume and tone controls, the Super Axe had compression and phaser circuits, each with its own on/off switch. With compression on, the sound waves get “squashed” or compressed, yield-ing increased sustain. This circuit had a sustain control that governed the amount of compression. The phaser circuit had a control for the rate of phasing, plus a second knob to let you determine how much of the phasing effect was blended in with the final output. In other words, you could have some background phasing effect or full-out grooviness. The result is an extremely playable guitar with remarkable tonal flexibility, but without the complexity that plagues many guitars with more onboard effects.

There was some discussion about naming this guitar after Chet. However, before the guitar was introduced in March of ’77, a copy was given to Roy Clark, who was performing regularly in Las Vegas. Roy liked the guitar and began using it in his show. Some folks began to refer to the guitar as the Roy Clark model, which didn’t sit too well with its designer! Perhaps it was foreshadowing. The guitar with the effects was called the Super Axe, a version without, the Atkins Axe.

The Super Axe appears to have been made for only about a year. By ’78 Atkins had severed his relationship with Gretsch, making the Super Axe his last model. How many of these Atkins Gretsch swan songs were made is unknown, but given how seldom you see one, probably not many. But if you get a chance to play one, you’ll be sure to say, “Thanks, Chet!”

This article originally appeared in VG October 2003 issue. All copyrights are by the author and Vintage Guitar magazine. Unauthorized replication or use is strictly prohibited.