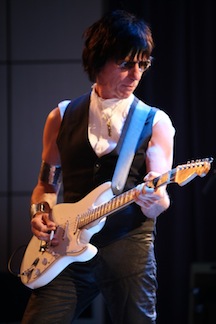 Jeff Beck will headline a string of solo dates beginning April 16 and wrapping up April 26. Beginning April 30, he and ZZ Top will make up the rescheduled dates from September, when the double-bill tour was cut short due to an unfortunate injury to ZZ Top bassist Dusty Hill.

Joining Beck are Jimmy Hall on vocals, Rhonda Smith on bass, Jonathan Joseph on drums, and Nicolas Meier on guitar.

Beck has twice been inducted into the Rock and Roll Hall of Fame: once with The Yardbirds in 1992 and once as a solo artist in 2009. He has won numerous Grammy Awards, including two in 2011 for Best Rock Instrumental Performance (“Hammerhead”) and Best Pop Instrumental performance (“Nessun Dorma”) both from his latest studio album, Emotion & Commotion.