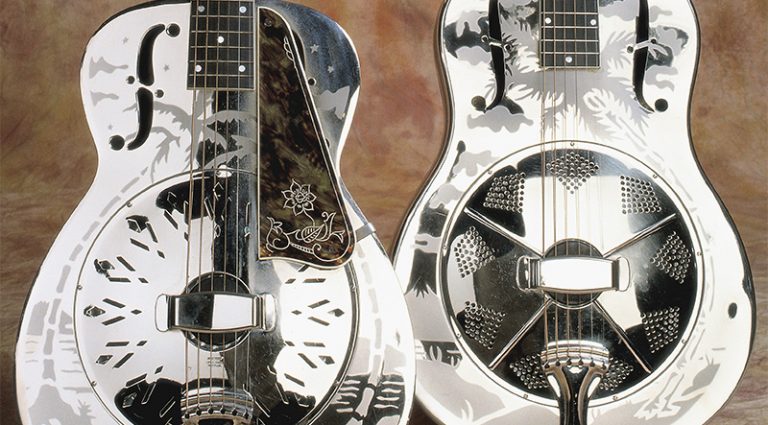 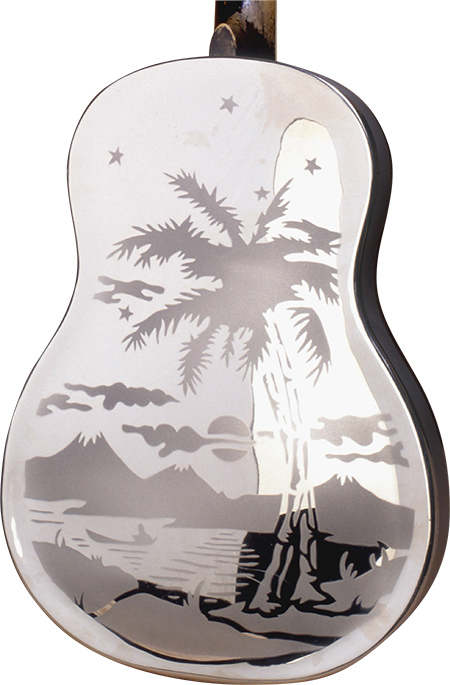 National. The name is patriotic! And what else but American inventiveness could have brought about a metal-bodied guitar?

The answer lies in the state of the guitar as a musical instrument circa 1925. The mandolin was popular and the guitar was beginning to evolve, particularly in Gibson’s new L-5, which revolutionized its sound and adaptability to popular music. In the mid ’20s, the banjo was king in orchestral settings, but Hawaiian music – in a craze began a decade earlier – became very popular and while traditional wood-bodied guitars were adapted to Hawaiian-style playing, there was a need for something different. While the size of the L-5 might have implied “bigger is better” (or at least louder), the search for an instrument with the volume of a banjo, the playability of a guitar, and the sweetness of the mandolin probably caused experimentation not only into new materials, but also new mechanisms for projecting the sound. 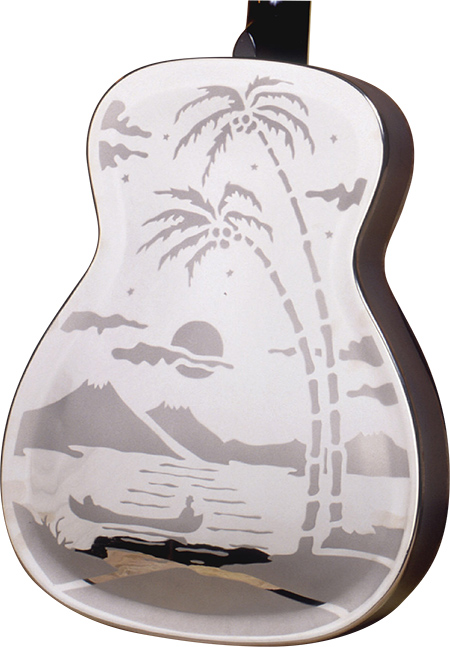 So why build a guitar out of metal?

Obviously, wood designs were experimented with and National used wood bodies on some low-end single-cone resonators. But why not use wood for the tricones? Better tone and volume were the easy answers, but there’s more to it. California’s John and Rudy Dopyera were striving for nothing short of a reinvention of the guitar as an instrument, which required new materials, designs, and manufacturing methods. Metal and its use in manufacturing were a product of the industrial age and certain metal products offered lasting durability, beauty, and functionality. This includes the National Style O.

Introduced in 1930, the Style O was the first in a series of single-resonator designs by National. Initially produced in a 12-fret style, the model received a facelift in 1934 with a tighter body that gave access to 14 frets clear of the body, and the following year brought a new coverplate design and headstock inlay.

This version of the Style O was immortalized on the cover of the Dire Straits Brothers in Arms album. Remaining unchanged was the brash, sinewy sound blues artist Johnny Winter once compared to “…a garbage can lid with strings.” The combination of nickel-plated brass body construction and a single resonator provided the Style O with a sound subtly different from the sheet steel-constructed Duolian and Triolian, or from the multi-resonator tricones. The Style O was adorned with sandblasted designs quite different from the etched tricones. A strong Hawaiian motif captures some of the romance of the period, the swaying palm trees and gentle surf evoke of a tropical paradise. A strong seller, the Style O remained popular through the ’30s.

By the dawn of the ’40s, changing musical tastes slowed National production, the rise of electronically amplified instruments further reduced demand for resonator guitars, then the intervention of World War II and attendant materials shortages meant an end. The company never recovered and the National name was absorbed into the giant Valco conglomerate. A sad end, but the legacy of the Dopyera brothers remains with fine instruments such as the well-preserved Style O pictured here. As musical instruments, they produce a tone unmatched by any guitar before or since. As physical objects they are as fine as any art-deco inspired works, and make excellent wall-hangers and conversation pieces, as well as fine instruments. The National Style O is truly a piece of history.

This article originally appeared in VG’s December 1998 issue. All copyrights are by the author and Vintage Guitar magazine. Unauthorized replication or use is strictly prohibited.