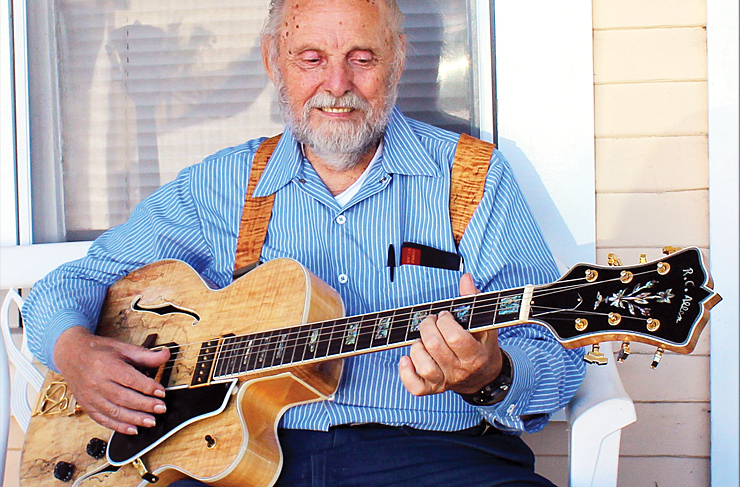 R.C. Allen, a noted luthier who built archtops for local and regional players of note and was a fixture at vintage-guitar shows in Southern California, died March 2.

Allen was renowned for sharing his secrets of guitar building and was the last of the original electric-guitar builders in Southern California. Known for his archtops, he made guitars for Merle Travis, Del Casher, and many more.

As a teen, Allen developed his technique with guitars that had chambers, which he learned from John Dopyera (Dobro) and Paul Bigsby, whose solidbody electric guitar bearing serial number 2 became Allen’s; he displayed it at guitar-show booths that he often shared with Guy Devillez and his brother, John Anderson, often allowing passersby to play it while telling them about its historical significance. Displaying his much-appreciated sense of humor, he made a copy of the guitar for Four Amigos guitar-show producer Larry Briggs with a logo that read “Brigsby.” When show attendees would ask for a picture with him, he would slyly turn half around, reach in his pocket, `pull out a set of crooked/stained fake teeth, and turn around with a big smile on his face.

Another of his customers, Rebecca Apodaca, recalled how when he presented her with a guitar he’d built for her, he was beaming from ear to ear. “I was admiring the wood he chose for its top – burled maple, stained brown. It was the color of my skin tone,” she said. “As I admired the inlays, he flipped the guitar around, and on the back of the headstock was a sticker that said ‘Made in Japan.’ We laughed! Then he pointed to the center of the back, and along the seam, the wood was figured in the shape of a heart. He smiled and said, ‘Look, I’m giving you my heart.’ I am lucky to say I will always have the heart of R.C. Allen.”

Apodaca also recalls a story Allen enjoyed telling about delivering a guitar to Glen Campbell. Campbell was working a studio session with a sax player and Allen recalled how, “They were playing the stupidest song I’d ever heard. It only had one word. How can you think anyone would buy a song with one word? It had a nice beat to it, but then they would stop, and Glen would yell, ‘Tequila!’ I don’t think it sold too well,” he would laugh.

Friends and acquaintances had planned a party/jam to celebrate his 80th birthday, with several music-industry luminaries set to attend.

“I just sent him a card two days [before he passed] to tell him how much his friendship meant to me,” said pickup maker Seymour Duncan.

“R.C. was always kind to me, and I tried to return his kindness, but I’m certain that I fell far short of what he gave me,” added guitar “Buffalo Bob” Page, former owner of Buffalo Brothers Guitars.