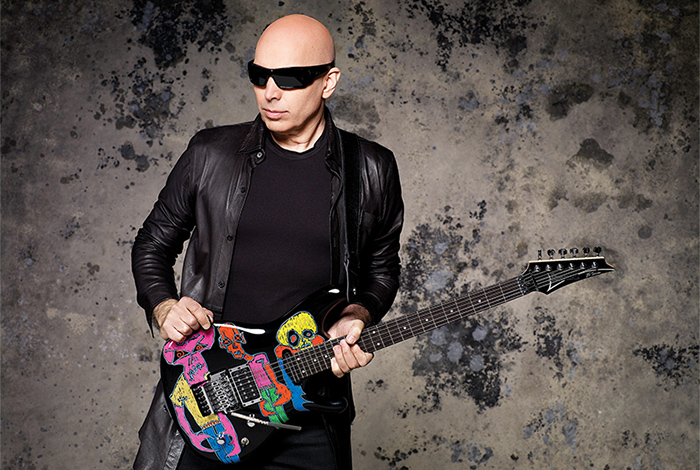 Joe Satriani’s latest record is a concept album that bridges the gap between traditional blues guitar techniques, and the fiery yet accessible compositions that made him famous. For Satriani it’s all about lyricism and the song, but Shockwave Supernova takes things up a notch with stronger melodies, soul, and a dramatic narrative. VG dropped in to find out how things went down.

Shockwave Supernova has a wider variety of guitar tones than we typically hear from you.
It was kind of a risk to create a project with 15 songs, and when I focused on just those to tell this unusual story, I needed to put a lot of pedals aside. It seemed easier to communicate the story through melody if the guitar had a direct way to speak to people. That meant natural guitar tones.

What’s the story line?
I had a moment on the last tour where I started to notice that I was playing with my teeth a lot. That got me to thinking about how I shouldn’t be doing that, for the health of my teeth. I started to riff on the idea of, “Who’s doing that? Who takes over the mild-mannered Joe Satriani when I walk onstage?” I was goofing on the idea that I invent this character and give him a name – Shockwave Supernova. He’s the ultimate self-promoting guitar player. He’s the guy who always wants to announce himself before he walks into a room.

I understand why you’d pull him out of your soul when you step in front of 60,000 people. It’s frightening. You need some device to give you courage to go out there and do your best. His alter ego takes over. He confronts the alter ego and says, “It’s time for you to evolve and do something better.” I used this like a creative device – almost like a personal concept… a concept album for me only.

I used the idea that Shockwave Supernova confronts his past and his present, represented by songs taken to a variety of stylistic places. The last song, “Goodbye Supernova,” is him airing his grievances one last time. That’s why the verses are in a minor key. During the breakdown, he goes through a rebirth and the song ends in beautiful D major. It’s him realizing that he’s come to the end of this life, but he’ll turn into something better.

It’s the duality between the introverted guitarist and the theatrical performer.
The day Jimi Hendrix died, I remember sitting on my couch, reading about my hero. The journalist was talking about the troubles Hendrix had coming to grips with his performing persona. I remember thinking that he was the greatest musician I ever encountered, but I have to make sure I never fall into whatever he fell into. He got trapped into that rock-and-roll circus-clown feeling. He’d look out into the audience and think, “They just want me to roll on the ground and play with my teeth.”

It’s ironic that this entered my mind while I was onstage in Singapore at the end of the Unstoppable Momentum tour. I was saying to myself, “Don’t play with your teeth.” But there I was, 20 minutes later, playing a solo with my teeth (laughs).

How did you get so many textures?
I decided it was easier to record DI and monitor with a variety of plug-ins. I needed to get the composing process together before I started being the annoying guitarist sitting there, turning dials. You go deaf that way. It was getting in the way of me creating something original.

John Cuniberti helped me reinvent my home studio so it would be a creative space. I monitored with SansAmp and Guitar Rig, made demos, then recorded different versions of guitar sounds. We brought it out of ProTools and ran it back into my Marshalls, or ran it into a bunch of small tweed combos. We layered the guitars so each had a different amp, a different speaker, and a different microphone.

It’s difficult to make rock instrumental records because there’s too much guitar (laughs). Just when you wish you had someone’s beautiful voice singing in the middle, you’ve got yet another guitar. The question is, “How do we blend these guitar sounds so they go together?” I’ve been blessed with being able to work with talented engineers as my co-producers to guide me. This record had a larger offering of different guitar techniques than some of my other records, which were more straight-ahead flatpicking and legato.

Can we expect to see you play with your teeth on this tour?
I’ll have to visit my dentist. Maybe he’ll make a prosthetic device that I can market (laughs).