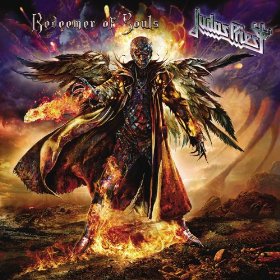 After a supposed farewell tour a few years back, Judas Priest has replaced longtime guitarist K.K. Downing with young guitarman Richie Faulkner and developed a completely re-energized sound. As a result, Redeemer Of Souls might be one of the best Priest albums ever.

First off, the studio engineering is remarkable. Priest’s guitars sound ferocious, like having a wall of Engl Powerball II and Marshall amps in your living room. You can really hear the detail in these super-saturated tube stacks. Veteran axeman Glenn Tipton is still co-leading the band, but he gives young Faulkner tons of room to strut: Richie takes the blazing first lead in “Dragonaut” while Tipton delivers a baroque-style figure run.

Faulkner – who’s an admitted fan of Michael Schenker, Zakk Wylde, and Slash – cuts a bruising wah-wah solo in “March Of The Damned,” deftly balancing the blues and metal ideas. And “Down In Flames” delivers just about everything you’d want in a Judas Priest song: the riff, crunch, vocals, and a liquid-hot guitar solo to boot.

Bottom line: If your enthusiasm in metal has waned over the years, check this out. It’s an amazing re-boot of Judas Priest that could make you believe again.