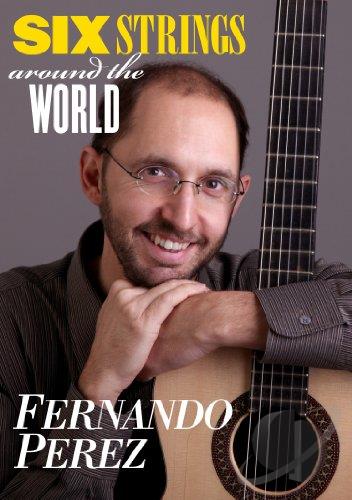 How many guitarists can masterfully play flamenco and then bottleneck Delta blues just as convincingly? There are eclectic, versatile guitarists, and then there is Fernando Perez. Usually if someone can play bebop with a plectrum and bossa nova fingerstyle, that’s considered versatile – or in Chet Atkins’ case, bouncing from country music to classical technique and repertoire.

What Perez accomplishes is as though Michael Jordan had succeeded at baseball – and then tennis and ice hockey. To do this, he didn’t just travel the world, he lived for years in Greece, Hawaii, Egypt, India, Turkey, China, Sudan, America, and his native Spain. Wherever he went, he absorbed the indigenous music and the culture behind it. This two-hour DVD includes 18 pieces for solo guitar (classical, steel-string, fretless gut-string, and a customized lap-style Hawaiian guitar, but with sympathetic strings used for Indian music), with Perez explaining their origins.

If you’re not in the mood for history lessons, you can just play the songs, although you’ll probably eventually want to learn more about the styles, be they familiar or foreign.