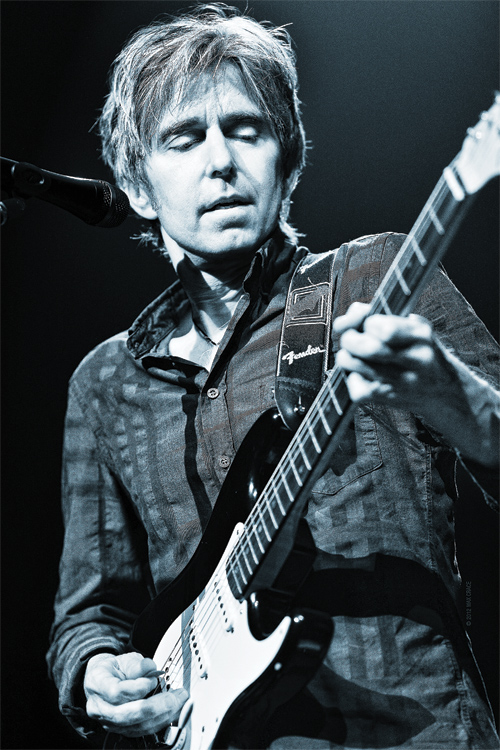 When Eric Johnson came to prominence, he sounded like nothing anyone had ever heard before. He made a Strat sound like a violin, and transformed the Fuzz Face into an instrument of highbrow elegance. The press conjured images of a Texas guitarslinger weaned on Jimi Hendrix, Jeff Beck, and Chet Akins, but hearing him was a whole other thing. The introspective and mild-mannered guitarist’s influences fostered individuality, depth, and musicality. Today, his impact can be heard in the work of Eric Gales, Joe Bonamassa, and an entire generation of guitarists.

Beginning with the album Tones in ’86, Johnson continued to release one inspiring album after the next, turning traditional virtuoso guitar techniques into magic. He’s adept at playing blues, covering Simon and Garfunkel’s “April Come She Will,” Wes Montgomery, or juxtaposing Jerry Reed with Lenny Breau.

Europe Live is the culmination of an enviable body of work. Johnson displays growth and maturity, and the album glows with a sense of jazz. It was recorded at appearances in Amsterdam’s Melkweg, Die Kantine and Bochum Zeche in Germany, and New Morning in Paris. With no plans for the recording to be released (at the time), the band performs with ease and confidence.

“Intro” begins the set with its New York City fusion atmosphere and sumptuous guitar tones. Then it’s off to “Zenland” as Johnson serves up a taste of Austin, effortlessly switching from dirty blues, twang, and his miraculous ability to switch from crystal clean blackface Fender sounds to dirty Marshall and fuzz without a hitch. Velvet tones soar with warm richness, guiding us to the set’s first vocal performance.

The crashing chords of the semi-autobiographical “Austin” support strong idiosyncratic vocals supported by inspired arranging and transcendent groove. Bassist Chris Maresh and drummer Wayne Salzmann are a perfect blend of cohesive backup and space. The band shines on John Coltrane’s “Mr. PC” as the opportunity to stretch out spotlights the soloists in a jazz-rock environment.

Intimate and cozy, Johnson’s live tone has never sounded better. Old favorites “Manhattan,” “Zap,” and “Cliffs Of Dover” are performed with perfection and spontaneity. “Song For Life” displays exemplary acoustic fingerpicking prowess, but never at the expense of the song. The call and response of “Last House On The Block” benefit from hypnotic riffing, Johnson’s emotional vocal delivery, and supreme soloing. Dynamics and mercurial shifts in techniques are what mind-blowing extended jams are all about.

Europe Live is a perfect introduction for the uninitiated, and a must listen for fans. Along with the new composition “Evinrude Fever” and the re-imagined “Sun Reprise,” this collection documents sublime artistry, passion, and life-affirming joy. It’s a live masterpiece chronicling a brilliant guitarist sharing ebullient music.

Scotty Moore/D.J. Fontana – and Various Others