Devo is far from the only band that was years ahead of its time. The difference is that 40 years after its formation, the group’s music and videos are still ahead of their time, and any attempts to pigeonhole the band (mainly by association) fall short. Devo is a genre unto itself.

This 70-minute DVD includes 20 song videos (many pre-dating MTV), along with footage of early gigs and commentary by members Mark Mothersbaugh and Gerald Casale. That latter “bonus feature” of DVDs is typically a snoozer, but offers fascinating insight here, and also shows that the band was involved in the production of the DVD – as opposed to the unauthorized “critical review” DVDs of rock artists that seem to come out weekly. 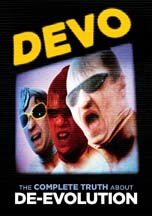 Devo started as a video concept before it became a working band. The lineup fluctuated, with personnel and instrument swapping, and when they made the videos for “Secret Agent Man” and “Jocko Homo” in ’76, they had no record label and didn’t exist as a band – the manifesto being that they were a self-contained unit where visuals, theatrics, and staging were as important as the music. Embracing surrealism and Dadaism, nonsense and irrationality played as big a part, or bigger, than logic.

Devo were performance artists playing the part of rock stars – nerds, and proud of it. The irony is that they became a successful band, because they were talented and, more important, inventive. Still, fans and critics weren’t always sure what was a joke (invariably dark humor) and what, if anything, was serious.

Their guitar anti-hero stance was perfectly on display when they took the Stones’ orgasmic “Satisfaction” beat and chopped it up into something utterly undanceable. But, of course, their bona fide hit single, “Whip It,” was inescapably catchy – played by five guys in turtlenecks, shorts, and red plastic planters for hats.

Mothersbaugh and his brother Bob, as well as Casale and his brother Bob all played keyboards, bass, and guitars, and the group went through more drummers than Spinal Tap. Bob Mothersbaugh earns props for playing a La Baye 2×4, an infamous ’60s flop produced in Green Bay, Wisconsin, as well as his mis-shapened custom Ibanez “spud” guitar. Mark meanwhile often played a Tele with various stomp boxes duct-taped right onto its face. They never resorted to pyrotechnics, but were masters of hooks, in songs like “Freedom Of Choice,” “Through Being Cool,” and the power-chording “Gates Of Steel” – the latter included here in a live performance from 1980.

Technically, Devo should be spoken of in present tense, although they’ve split up and reformed several times. Three-fourths of the current edition are original members, and, though they never won a Grammy, one can imagine them relishing the irony of the Daft Punk “robots” accepting five statuettes at this year’s ceremony. Maybe one day, the music industry will catch up with Devo as well.