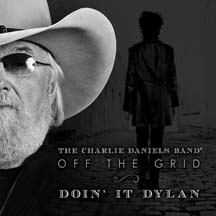 Before he became a leader of the Southern Rock movement, Charlie Daniels was part of a new breed of Nashville studio musicians who came to prominence in the late ’60s. In that role, he played guitar on Bob Dylan’s groundbreaking 1969 country-rock album Nashville Skyline. Daniels’ respect for Dylan’s compositional genius motivated this tribute, framing his gravelly, assertive voice with rocking, superbly executed acoustic arrangements.

Except for 1975’s “Tangled Up In Blue” and “Gotta Serve Somebody” from 1979, Daniels’ focus is quintessential ’60s Dylan. The straightforward treatments of “The Times They Are A-Changin’” and “I Shall Be Released” contrast with an appropriately dark interpretation of “A Hard Rain’s A-Gonna Fall.” He re-imagines “Mr. Tambourine Man” with a full-bodied country treatment.

“Quinn The Eskimo,” recast as a Cajun-flavored sing-along, allows Daniels to unleash his fiddle.

Dedicated to Skyline producer Bob Johnston, a longtime Daniels friend, Off The Grid succeeds as both homage and a superbly executed, unpretentious stand-alone effort.

This article originally appeared in VG‘s  August’14 issue. All copyrights are by the author and Vintage Guitar magazine. Unauthorized replication or use is strictly prohibited.