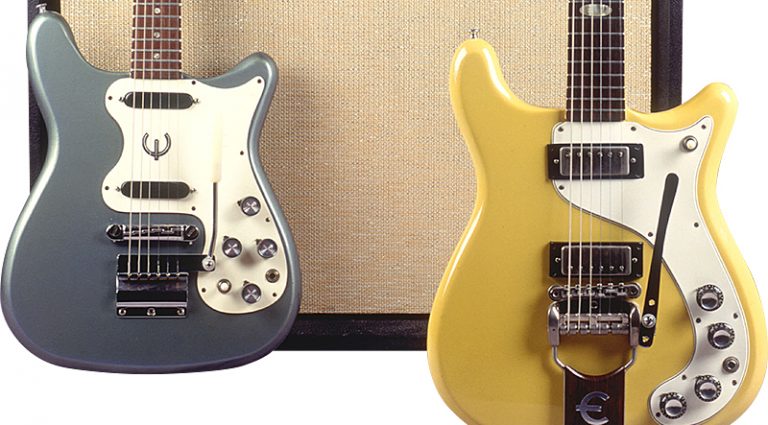 Gibson’s acquisition of Epiphone in 1957 presented a tremendous challenge to guitar designers and marketers at the company. One challenge was to design a new solidbody instrument that could be produced at the Kalamazoo factory using existing tooling and production lines. Another was to make it visually distinct from Gibson’s Les Pauls.

The answer? The Crestwood, the Wilshire, the Coronet, and the Olympic – all-new solidbodies introduced in 1958.

In these, Gibson was still using leftover parts from the original Epiphone company. But those crafty designers were working overtime, and Gibson’s mini-humbucker – a true double-coil pickup the same size and shape as the “New York” pickups used in this line – quickly supplanted the inferior-sounding Epis. The Crestwood was introduced with a sunburst finish, which gave way to cherry in ’59 and at first had 1 3/4″ thick bodies just like their Gibson LP Junior and Special kin.

The new Epis were quickly slimmed down to 1 3/8″ for ’59, then dubbed Crestwood Custom.

A large white pickguard complemented the Crestwood body design and further distinguished this model as an Epiphone, but also appeared similar in shape to one of the popular Danelectro models of the time. Early headstocks were standard three-on-a-side style.

But the designers weren’t done.

Seeking to position the line as a competitor to Fender rather than Gibson, a six-on-a-side headstock design and tuner arrangement debuted in ’63. Clever styling provided more differentiation between Epiphone and the Gibson SG, and the new headstock managed to use six-on-a-side tuners without copying Fender. This “batwing” headstock, as it has come to be known, was very different from anything Gibson offered.

Other changes to the line in ’63 included three custom-color options (not shared with Gibsons) and the Crestwood Deluxe appeared as the top of the line. The confusing designation with “Custom” as the standard in the line and “Deluxe” and the fancier model differed from the Gibson arrangement. Certainly, the Deluxe model was fancy (marketers at work again) with a bound neck and headstock, three pickups, and a block-inlaid ebony fretboard.

The Crestwood Custom shown here has several attributes that date it mid-’60s: batwing headstock, black knobs, and custom color (Sunset Yellow). This model also has the Epi vibrato – an exclusive offering (those designers at work again) called the “Trem-o-tone” – which worked much better than any devices fitted to Gibsons of the period. In the background is a similar student-grade Epi solidbody called the Olympic. It has plain fittings and Melody Maker pickups.

The ’60s Epiphone solidbodies featured the same set-neck design and quality construction as Gibson models and provided Gibson a second outlet for sales. The body style chosen in ’57 for the Crestwood foretold of changes to Gibson solidbodies, and market acceptance of the Crestwood and other Epi solidbodies undoubtedly influenced Gibson ’s SG model. Epi solidbodies were discontinued in 1970, when all Epiphone models began to be sourced from manufacturers outside the U.S.

This article originally appeared in VG January 1999 issue. All copyrights are by the author and Vintage Guitar magazine. Unauthorized replication or use is strictly prohibited.