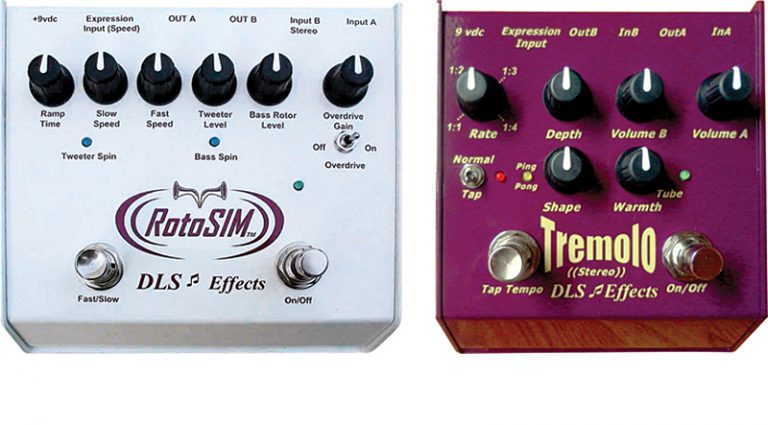 If you’ve ever played guitar through a Leslie rotating-speaker cabinet, you’re aware of its lush 3D sound. Many guitarists would love to be able to use that sound – and would, were it not for the fact a Leslie cab can test not only one’s lumbar region, but their wallet!

Through the years, a host of effects companies have offered simulations of rotary-speaker. But, capturing the complex characteristics of a rotary speaker is not an easy task – especially when players want it to fit on a pedalboard!

The same can be said of tube-driven tremolo; while tremolo pedals are common and relatively inexpensive, capturing the warm, musical sound from a vintage amp is not all that easy to replicate in a pedal.

DLS recently asked whether we were interested in giving both boxes a run. Because we’re almost always agreeable to such queries, we grabbed a Fender American Vintage ’65 Strat and a Fender Blues Deluxe 1×12 to help us along.

The TR1 Tremolo has an extensive control setup – Tap-Tempo, Normal/Tap mode, and a Rate knob that controls the speed of the tremolo. There’s also a Multiply/Ratio control, Depth, individual Volume controls for A and B outputs, Shape (selects wave shape and cycle), and Warmth, which adjusts the bias of the pedal’s two analog optical circuits (in conjunction with Shape), allowing the player to dial in specific tremolo sounds from thick and warm to choppy and aggressive. The Warmth control does a great job softening the wave and adding a subtle low-fi analog/tube flavor. The individual Volume controls allow the user to balance the effect between the two outputs, and make up for any volume lost with the effect engaged. Tap Tempo doubles to engage a “pan” mode, creating a spacious pulse effect, in stereo. The TR1’s Expression input allows for control of the speed via standard TRS expression pedal. It can create an intense tremolo effect and syncopation to the beat.

The RotoSim utilizes a hybrid analog/digital circuit to simulate the swampy, organ-like characteristic of a Leslie rotary-speaker cabinet, an effect popular in the late ’60s/’70s and “revived” by blues guitarists, most notably Stevie Ray Vaughan. Using this circuit, the RotoSim further creates the sound of a separate high-frequency horn tweeter and low-frequency driver while maintaining a warm analog sound. Like the TR1, the RotoSim offers a boat-load of control over its sounds, and its smaller footprint (53/4″ x 5″) is more pedalboard friendly and takes up less real estate than most rotary-speaker simulators.

Set for slower speeds, it produces a thick, chorus-like effect; at faster speeds, that familiar Leslie swirl. But the real magic occurs during the speed shifts from slow to fast or fast to slow, where it can render a super-lush sound with tons of musical pitch-shifting and frequency separation. With a real Leslie, the player can independently control the speed of the bass rotor and the high-frequency tweeter. The RotoSim offers much the same, visually represented with the individual high- and low-speed LEDs. In a stereo setup, the RotoSim produced an accurate rotary-speaker simulation with a wide, spacious sound.

The pedal’s overdrive circuit is subtle, but adds a touch of analog dirt, allowing it to cut through the mix and thicken overall sound. DLS designed the two outputs to sound slightly different. Output A is more true/transparent, while Output B is “fattened” ever so slightly, allowing for a bigger, more-realistic sound when in stereo. It also better matches the output of a particular amp. In our test, Output B sounded better with a Fender amp, while Output A sounded better with a Vox. A Roland expression pedal plugged into the RotoSim bypasses the Fast/Slow footswitch, allowing blending between slow and fast speeds on the fly, similar to an old-school Uni-Vibe.

In extensive tests in various environments, the TR1 and RotoSim offered easy-to-dial-in sounds. Both produced fat, warm analog sounds that were musical and lush.