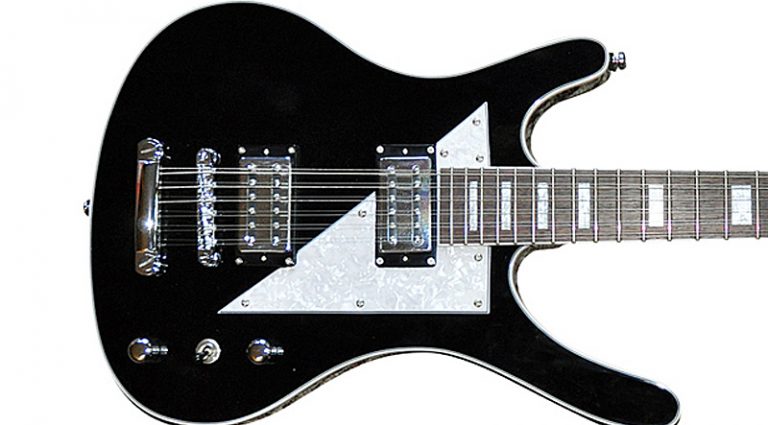 Since its appearances in the Austin Powers movies, Musicvox guitars have received a cachet for cool ’60s hipness and wicked space-age designs. Their latest axe, the MI-5 12-string, continues that tradition with a double-cutaway body shape that sports an extra-long bottom horn. Let’s explore this groove machine.

This Korean-made guitar has a solid mahogany body with a bolt-on maple neck and rosewood fingerboard. It weighs 7.4 pounds, and has a 243/4″ scale, 111/16″ nut width, one control each for Volume and Tone, plus a three-way pickup switch. Twangability comes courtesy of Musicvox Special Vintage humbuckers in Filtertron-style housings. There’s also a beveled three-ply pearloid pickguard, triple-bound body, tune-o-matic-style bridge and tailpiece, and a mondo open-face headstock with Kluson-style tuners. In old-school style, the paired tuners point outward and backward. Our test guitar was finished in black with pearloid block inlays akin to that on a Les Paul Custom. Color options include Seafoam Green, Candy Apple Red, Silver Sparkle, Gold Sparkle, White (with gold hardware), and Taxi Yellow.

When you pick up the MI-5, its shorter, Les-Paul-like scale might throw you for a second. The bridge is set back, creating a compact design, but give it a few strums and you’ll begin to dig its unique vibe – quite likeable – and the bolt-on neck is easy to grab and play.

Plugged into a modeling amp, the MI-5 covered a lot of ground. Flipping between pickups, the bridge delivered thinner/’60s jangle, with some icy highs for playing Byrds, Marshall Crenshaw, or The Police (use the Tone knob to temper that treble, if you like). The neck pickup, meanwhile, brought on fat, warm, and almost acoustic-like tones, more like classic George Harrison or Jimmy Page. The MI-5 sounded great with various effects ladled on, notably reverb, chorus, and generous dollops of tremolo. Crank up the overdrive and it moves nicely into Rush territory where you can conjure Alex-Lifeson-style chords using shimmering open strings – strong and authentic.

Musicvox has another winner on its hands. Aside from the shorter-feeling scale, most will have to get used to the tuners. But again, it’s a classic configuration that has worked for nearly 50 years. More importantly, the tuners hold tune, which is critical with a 12-string. Add their good tone, a nice design (dig that triangular pickguard!), and that all-important vintage jangle, and you have a fine electric 12-string on your hands. You may not put it down for awhile.