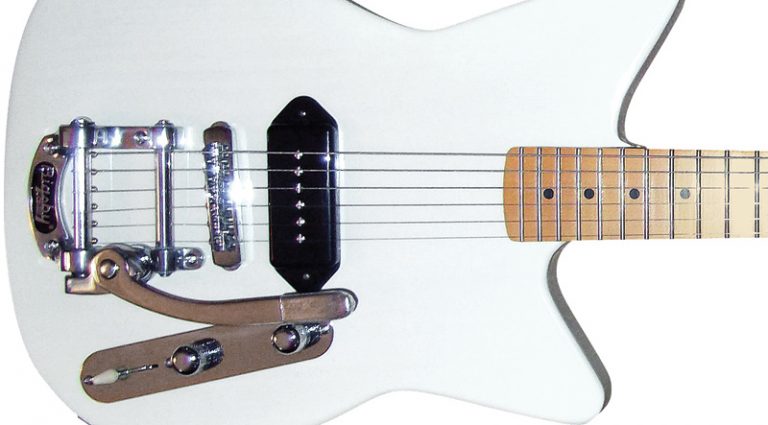 Today’s guitar market is one of extreme preferences. For some, the idea of countless options and exotic woods and craftsmanship is the name of the game. For others, the tendency is more toward “aged” instruments that recall days gone by. What often seem to be missing on this spectrum are instruments that fall somewhere in the middle. This is where Ohio luthier John Mosconi and his team have found their niche – making handcrafted guitars with vintage inspiration, but with basic, modern functionality. Their latest offering is the Tremcaster Single Ninety, a minimalist’s dream.

The Single Ninety uses Tremcaster’s patented body and headstock styling with a super-lightweight pine body bolted to a maple-on-maple honey-lacquered neck. An optional rosewood fingerboard is available for those who desire a little deeper tone and midrange. The headstock is finished in a honey lacquer reminiscent of other amber-tinted finishes on the market. Gotoh vintage-style tuners have a classic nickel finish, and a hand-cut bone nut rounds out the neck’s traditional appointments.

The Single Ninety’s body continues the guitar’s minimal, straightforward approach. There is no binding but a range of classic colors recall the ’50s and ’60s. The test model came in a nicely sprayed vintage white with just the right hint of cream. The body hardware also exhibited a vintage flair, as well as pro-quality components, including a Schaller roller bridge and a Bigsby tailpiece.

Giving the Single Ninety its oomph are electronics designed to rock. A Gibson P-90 holds the guitar’s lone pickup position, giving it the spirit of a Junior but also added versatility, thanks to a three-way switch with bassy, normal, and hot positions, allowing much more diversity than normally found in P-90-style instruments. The attention to detail is taken even further with the use of Switchcraft controls and CTS potentiometers. The end result is a handcrafted, American-made instrument that won’t break the bank.

The Single Ninety was put through its paces both live and in the studio. The process proved just how diverse the aforementioned features make this instrument. For a single-pickup guitar, the tonal options were impressive. The bassier setting truly offered the most applications for non-rock styles. The roundness was right at home for cleaner tones. Here, blues and chicken-picked country seemed to excel, and even clean runs for modern jazz styles and even fusion.

The normal setting was classic P-90 and tailored to the needs of more classic rock styles. With a slightly compressed setting, some spring reverb with tremolo, and application of the Bigsby, let there be no question that the Tremcaster Single Ninety will transport the player to Surf Central. In fact, it might be difficult to not want to just “hang ten” all day on the Single Ninety, but this guitar definitely has more to offer.

As hinted at earlier, if there is one thing that this guitar can do it is rock out. Without fail, the Single Ninety kept driving and the harder it was pushed the more it liked to open up. The hotter switch position on the Single Ninety translates to a superb, souped-up Junior tone. Aggressive but with plenty of bite, the guitar can flat out demolish power chords. The pine body surprisingly gives it a nice top end, preventing the P-90 from getting either muddy or overly twangy. Pine has never been a popular option for instruments, but the Single Ninety makes an argument for it being used more often.

Kudos to Tremcaster for offering a unique and straightforward instrument in the Single Ninety. Its styling may not be for everyone, but the guitar can hang in there with any rocker and is a lot more diverse than what might initially meet the eye. The best part is the price – at just over a grand this is an American-made instrument priced like similar import models. Who wouldn’t prefer to support our own when it comes to a handbuilt low-production-run guitar?