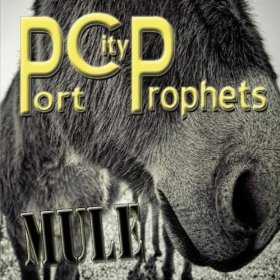 The Prophets are a blues-rock bar band that brings around a lot of people to music they might not otherwise have heard. The PCPs will remind you of both Grand Funk and ZZ Top. With the opening cut “Close Your Eyes,” they’ll also bring fond echoes of Lee Michaels to those who remember.

When guitarist Troy Tolle breaks out the slide for the slow, funky blues of “Jesus Saved My Soul, But…” the ZZ Top connection shows through musically and thematically. But the power, straightforwardness, and bassist Tim Kirkendall’s Mark-Farner-like vocals remind one most of Grand Funk. Tolle’s showcase guitar is more ﬂuid and a bit more dazzling than Farner’s, but the sweat energy, helped in no small part by Henry Ancrum’s drums, is up there with the best of them.

The Port City Prophets are capable of making the transition from bar-walking, crowd-pumping, guitar-centric bar band to one that can come up with the goods to make a solid record – which is exactly what they have done with Mule.

Darren Jay and the Delta Souls

Andy Timmons – That Was Then, This Is Now