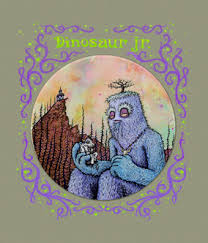 Though he introduced unabashed (and deafening) guitar heroics to the indie slacker nation, Dinosaur Jr.’s J Mascis is more often cast as an impossible misanthrope. This stunning new coffee-table book, though brimming with ultra-rare photography and memorabilia, also details all the sonic and personal mayhem in the words of the founding members, colleagues, and associates. Notably, bassist Lou Barlow and drummer Murph record frank accounts of their bitter fallings out with Mascis, as well as the trio’s reconciliation, while Mascis offers contrite hindsight.

Also entertaining are accounts of Mascis’ ﬁrst Jazzmaster purchase (from “Slimy Bob’s Guitar Ripoff”), his pedals and amps, and contemporary guitarists’ reactions to him and the band. “What J was the ﬁrst to do was turn his amp full up and position it right behind his vocal mic,” says Bob Mould, a man who knows a thing or two about volume. “Then every time he moved his head just half an inch to either side, you’d think you were hearing guitars for the rest of your life.”

Available in limited quantities, including a “signature edition” with facsimile tour diaries, this is a fantastic chronicle of an inﬂuential band and an often overlooked guitarist.