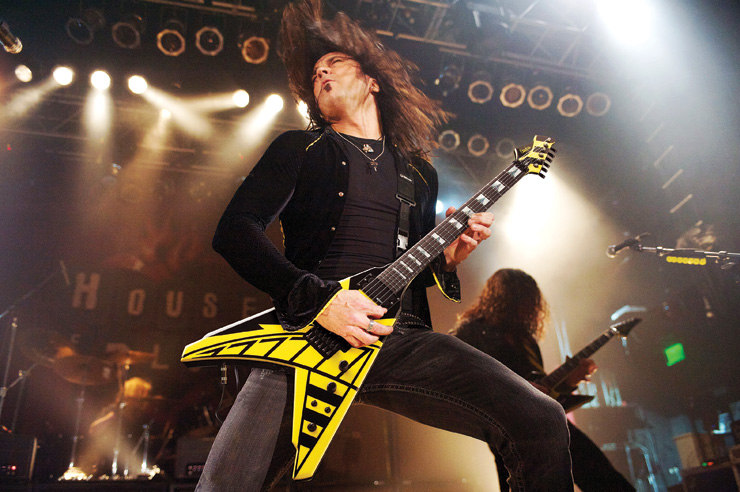 The yellow-and-black attack of the Christian-metal band Stryper has returned. The band’s new album, Second Coming, helps mark 30 years of preaching their metal gospel and selling more than 10 million albums worldwide. The band returns to the spotlight with a renewed sense of vigor and passion.

Second Coming is 16 tracks including re-recordings of 14 songs from the band’s catalog and two new songs. We sat with guitarist and front man Michael Sweet and learned that when it comes to guitar, he isn’t just some first-position strummer!

What have you been up to?
We just wrapped up re-recording classic Stryper songs and two new songs. It’s not a compilation or a best-of. It started as a way for us to retain the rights to a lot of our songs for film and TV. A lot of bands are doing that these days. We weren’t even going to release it – that wasn’t our original intent. But after hearing a lot of positive feedback from fans, we thought, “Why not release it.” We signed a deal with Frontier Records and they’re releasing it as well as an all-original album we’re starting on in April.

It’s really an exciting time for us. It was fun re-recording these songs, and we didn’t really change them up too much. They’re in the original form as far as arrangements go, but obviously sound a little different. My voice is a little deeper and not as Mickey Mouse.

You recorded that material a long time ago. Can you still hit those high notes?
I’m trying (laughs)! They have a little different tone because my voice has changed a bit, but I don’t know that that’s necessarily a bad thing! I hope it’s a good thing. The songs are sung with a bit more of a masculine voice. I had a higher, thinner voice. Some people liked that back then, but today it’s a little richer, deeper, and has a little more balls to it. It was fun making the record. We’re excited.

Were you tempted to change anything?
We pretty much stuck to the original arrangements and of course the signature Stryper guitar tone. The guitars are more in-your-face. We used a Boogie and an Orange Thunderverb 200. I did two tracks of rhythms, Oz Fox did two tracks of rhythms, and then we split up the solos. We did different endings to solos, but it’s pretty much the same.

Which guitars did you use?
I used a Carvin replica of an old Randy Rhoads guitar I had. It had Seymour Duncan Blackout pickups. I also used a PRS Custom 24 with Blackout pickups, as well. A company called Overture is making me a signature model V copy. They make nice guitars and it has that old-school Stryper paint job, 24 frets, ebony neck, Bare Knuckle pickups, a Floyd Rose, and a titanium block. It’s really souped up.

Over the last few years I’ve noticed more people coming up to me after shows and saying, “Wow, we never knew you played guitar!” It’s always incredibly bizarre to me, because I’m playing guitar in the videos and have been playing live for 30 years. It’s mindboggling, but I hear it still.

Why do you think people assume you’re a first-position strummer?
I think they just assume that because I’m the singer. It’s not the case. We were a trio for a number of years. I started playing guitar when I was five and started singing when I was 12. Guitar is my first instrument and I’ve always considered myself a guitarist first and a singer second. I’ve written a lot of the solos over the years. A lot of the time I’ll write out the solo, teach it to Oz, and he’ll learn the harmony to that solo. Songs like “Soldiers Under Command” or “Calling On You” were created that way.

Has there been a change in your live sound?
I’m always trying new things and trying to improve my tone. When I travel with my own gear, it’s usually a Mesa Boogie Mark V through a couple of Mesa cabs. I also have two Splawn heads. On my pedalboard I have a Radial London Bones Distortion Pedal, which is their answer to a hot-rodded Marshall tone. I drive the front end of that with a parametric EQ, which is the Tech 21 Para Driver. That’s how we get that Stryper sound. It gives us that cocked wah, overdriven, notched-out sound. I’ve also got a Line 6 digital wireless, a delay pedal by Tech 21, the Tech 21 Boost Chorus, some Dunlop EQ pedals, and a ISP Decimator, which I love for noise reduction. I have a cool little pedal board and I love it. I like to get my tone and run with it. I don’t switch my sound live, ever. I don’t have my pedal board at my feet. I keep it up on an amp. I set my tone and that’s it for the whole show. I don’t have anything in my way.

Stryper is a Christian band. Is your faith still strong?
Absolutely. It’s stronger than ever and we’ve never wavered. We’ve taken heat along the way, but it’s the foundation of who we are, and always will be. This is our place in this world. They’re aren’t a lot of bands doing that, but we are, and I think it’s needed. It’s needed for balance. This world is pretty messed up – it’s pretty dark – and we’re trying to shine a little light on the dark world. We’ve been doing it for 30 years strong.