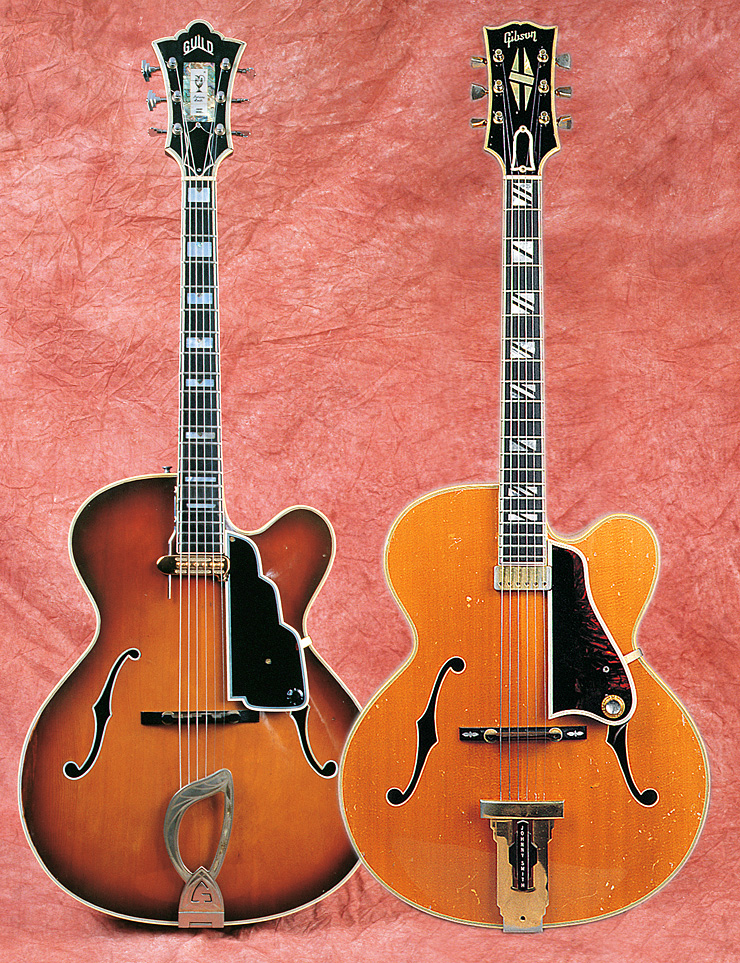 The name “Johnny Smith” is synonymous with class, elegance, and style. Most guitar players are familiar, if not with the man or his music, certainly with the guitars that bear his name. The instruments reflect Smith’s unique approach to playing and jazz guitar, in particular – ultra-smooth and restrained, yet sophisticated. From the Gretsch Synchromatic 400 to the fabulous custom D’Angelico New Yorker to the Guild, Gibson, and Heritage models, Smith has been associated with beautifully designed top-of-the-line instruments.

The Guild and Gibson models that bear his name are a blend of function and style. They have a similar design and construction philosophy, including a single-cutaway body with a carved top and floating pickup(s) with controls mounted clear of the top, to increase sustain, projection, and response. Both were produced in limited numbers – fewer than 20 of the Guild were made in its three years of production.

The Guild shown here, from 1960, has an ornate headstock, stairstep pickguard, and a simple-yet-elegant tailpiece. Ironically, Smith never used one, due to a disagreement over the way the top was carved. The effort, however, wasn’t totally without reward for Guild, as it used the design to produce  the Artist Award model.

In ’61, Smith became a Gibson endorser and, with Barney Kessel and Tal Farlow, helped form a lineup of jazz-guitar models made up of the L5, Super 400, ES-350, L-7, Byrdland, and ES-175. Together, they made Gibson the dominant manufacturer of jazz guitars in every price range. The Johnny Smith model was based largely on Smith’s D’Angelico New Yorker, with traditional Gibson styling and body specs requested by Smith – a 17” wide body with a slightly shallower body depth than the L-5 and Super 400, a 25″ scale, and a 20-fret neck. This guitar started as a single-pickup model but a double-pickup version was soon available. The ’61 you see here is noteworthy for its less-common natural finish.

If you ever have an opportunity to play a Johnny smith model, by all means do it, even if you’re not inclined towards jazz. A transformation may take place, much like what happens when you slip on a tuxedo. And have you ever seen anyone look bad in a tuxedo?

This article originally appeared in VG Classics #01 issue. All copyrights are by the author and Vintage Guitar magazine. Unauthorized replication or use is strictly prohibited.