Mention the Ventures to a pop-music aficionado and the conversation will likely focus on the surf-music phenomenon of the early 1960s or – if that person also happens to be instrument-savvy – the band’s affiliation with Mosrite guitars and basses.

Though the partnership lasted only a half-decade, the Ventures have been perpetually associated with Mosrite, as bassist Bob Bogle noted in a 1997 interview with VG.

“[The association with the brand] will probably follow us around for the rest of our lives,” he said. “We can’t seem to shake the connection.” A closer look back, of course, reveals more, including the fact that although the band recorded surf instrumentals as the music reached its peak, it actually preceded the genre, charting with “Walk Don’t Run” in 1960. Nonetheless, the Ventures and Mosrite are the first band/brand association recalled by many a babyboomer guitarist.

The single-pickup version of the Ventures Model bass was part of the Mosrite line from 1963 to’65, while the two-pickup was offered from ’66 to ’69. The single-pickup example you see here is exactly like the one on the cover of the 1965 album The Ventures Knock Me Out!; its body has the classic Mosrite profile, M-notch headstock, planaria-head truss-rod cover, metal nut, zero fret, thin bolt-on neck with 20 frets (joining the body at the 18th), tiny fretboard markers, 301/4″ scale, adjustable/intonatable bridge with large silo-shaped saddles (covered here by a handrest), “German carve” around its body (as found on most Mosrite solidbodies), and a wood-trimmed tailpiece. The bodies were basswood, necks were maple, and fretboards were rosewood. Like many Fenders and Mosrites of that era, the white celluloid pickguard on this one has a slight “mint green” patina.

A 1965 Mosrite flyer hyped the Ventures Model with a bold-faced proclamation, “The finest performance demands the finest instrument!!” and showed the quartet of Don Wilson, Nokie Edwards, Mel Taylor, and Bogle in matching outfits with matching instruments. Other copy says, “A quality instrument, designed especially for the demanding professional musician and the amateur who desires the finest.”

Around the time the two-pickup Ventures models were introduced, the company had switched to “duckfoot” tuners on its basses, as seen on the three-tone sunburst example shown here.

When the Ventures’ affiliation with Mosrite ended in a controversial flameout in ’67, the guitar and bass models were continued as the Mark series (the bass was the Mark X Model 103).

Mosrite hooked up with another notable guitarist, Joe Maphis, for a signature series of instruments, and the bass in that aggregation was known as the Mark X Model 502. Maphis-series basses had the same neck, short scale, and features as the Ventures Model, but with slightly larger bodies that were a combination of a hollowed-out walnut base (with a depth of an inch and a half) with a spruce top that was, according to factory literature, “music grade.” The bass had binding (called “purfling” in the ’67 catalog) where the top and base joined. Guitar builder Bill Gruggett (1937-2012), who worked at Mosrite and had his own line of guitars and basses (VG, July ’12), recalled painting the blue bass during his tenure with Mosrite.

The Maphis silhouette was also used with the Combo series instruments, but the CO Mark X Model 301 bass was hollow (though a Mosrite catalog referred to it as “semi-acoustic”). Combos typically had a maple back and sides, with a thick hardwood top (note the bound f-shaped sound hole). Like the Maphis model, it also had a depth of 11/2″, but had “purfling” front and rear. The handrest has been removed from the example you see here. Note the similar pickguard silhouettes on the Venture Models, Maphis, and Combos basses.

The Celebrity models looked more standard/commonplace, which means they were the “odd man out” amongst the line. While their double-cutaway silhouettes resembled Gibson’s thinline series, Celebrity guitars and basses had bolt-on necks, and were promoted as “Acoustic Arch-Top Guitars.” The series also had multiple binding front and back, as well as bound sound holes.

The pickguard for Celebrity models was a blob-shaped item, and the controls (master Volume and Tone, three-way pickup toggle switch, and jack) were all top-mounted in another piece of plastic shaped like a painter’s palette.

By the ’70s, Mosrite had fallen out of favor. In the ensuing decades, it opened and closed several production facilities. Company founder Semie Moseley died in August, 1992, soon after opening a facility in Arkansas; it closed the following year.

Despite its brevity, the pairing of the Ventures with the Mosrite brand motivated an untold number of guitarists to seek out Mosrite instruments. Today, the band and the brand enjoy unique status in the history of American guitar music. 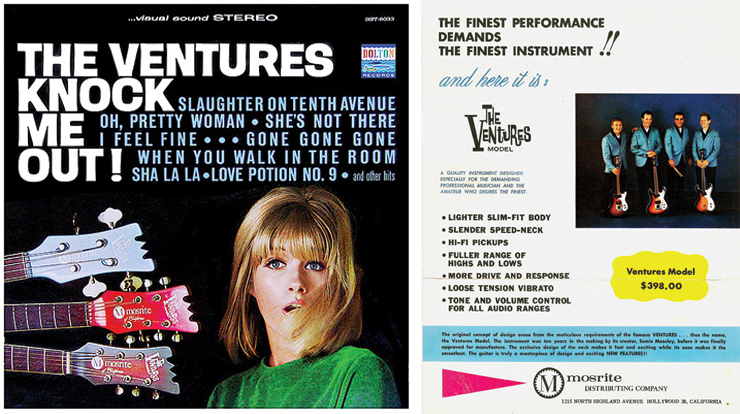