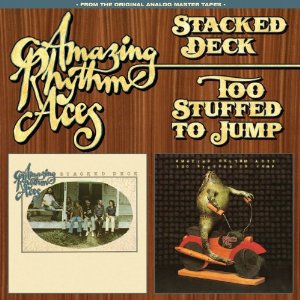 These two wonderful albums have been released on CD in the past, but this new combo package trumps all those editions. The sound is brilliantly clean, there are liner notes to supply some background history, and for the first time, the Aces’ 1975 version of “Mystery Train” appears on a disc.

But what really matters here is the music. Stacked Deck, their 1975 record, ranks as one of the finest debuts by any band. The Aces perfectly mixed rock, country, soul, and that mysterious southern R&B feel into a perfect blend. The late Barry “Byrd” Burton supplies swampy guitar work on “The Ella B,” their big hit “Third Rate Romance,” and the darn funny, “Hit The Nail On The Head.” There simply isn’t a bad cut on the disc.

Their followup album didn’t disappoint, either. It added a Southern rock feel to the mix with blistering leads from Burton. While he is the six-string hero, the rest of the band is on target, including Russell Smith’s evocative vocals that hit the mood of every song, whether funny, romantic, or melancholy.

These are two of the best albums of the ’70s, and it’s good to see them back on the shelves in such a fine edition.