Where the evolution of guitar amplification in general traces musicians’ needs to be louder, the history of Vox follows, in particular, The Beatles’ need to play louder. And this was a very real need indeed, with thousands-strong crowds of screaming teenage girls drowning out the Fab Four’s live shows with frustrating regularity. Vox founder Tom Jennings and his head engineer Dick Denney might have doubled the power of the AC15 to produce the concert-ready AC30 for Hank Marvin and the Shadows, who performed both as a solo instrumental act and as Cliff Richard’s backing band, but their AC50 was the result of a desperate effort to help the world’s most popular band to be heard.

Virtually running to keep up with the pace of The Beatles’ popularity, Denney developed the AC50 late in 1963 by first modifying existing speaker cabinets, and quickly getting together the amplifier chassis to do the job, rather than the more-intensive R&D venture devoted to the flagship AC30 earlier in the decade. As Denney told author Andy Babiuk in Beatles Gear, “I made up the first one using an AC30 cabinet with two 12″ speakers plus a ‘horn’ speaker for more top end. The horn didn’t fit, so I cut a hole for it in the back of the cabinet. I didn’t have the time to make up a new cabinet, because we had to get them their new amps. There was always a rush.”

As a result, the first AC50s were delivered to George Harrison and John Lennon as custom-made, single-channel heads and modified cabs ready just in time for the band’s Christmas ’64 concerts in Finsbury Park, London. At the same time, Denney concocted the prototype of the AC100, given to Paul McCartney to replace a solidstate Vox T-60 bass amp that wasn’t cutting it, volume-wise. The first production AC50s, which hit the market early in ’64, were also single-channel amps, initially with compact “small box” cabinets, with a larger head shell introduced later in the year. Both had GZ34 tube rectifiers like the AC30 (and Marshall’s JTM45, for that matter). The AC50 head’s initial retail price of just under £100, equivalent to nearly $2,000 today, might make you feel a little better about the supposedly high prices of contemporary “boutique” amps, considering the big Vox’s paucity of features.

The first two-channel AC50s arrived around August of ’64. Rare early examples of this incarnation had the iconic early brown-diamond Vox grillecloth, but by the fall of that year they were dressed in the black-diamond cloth of the outstanding ’65 AC50 you see here. Also gone was the tube rectifier, replaced by more-robust solidstate diode rectification. Otherwise, the two-channel AC50 was much like its single-channel predecessor, electronically, although it split the MkI and MkII’s voice-for-all-seasons preamp into Normal and Brilliant channels, with slight changes in the voicing of the early gain stages of each, to suit bass and lead guitar respectively (much as did Fender’s blackface Bassman head and many Marshall heads). As the conjoined goals for this design were clarity and headroom, Denney used the two halves of a low-gain ECC82 (12AU7) preamp tube as the first gain stage for each channel, with a 500pF coupling capacitor from the Brilliant channel to the next stage to accentuate its highs, and a more-standard .022uF coupling cap on the Normal channel for a fuller, more balanced tone. The former also included a bright cap on its Volume control. Both channels used the same value of 25uF bypass cap around the cathode-bias resistor of the ECC82 – rather than giving the Brilliant channel more crunch with, for example, a .68uF cap as Marshall would use – though the first gain stage in the Brilliant channel was biased hotter. Otherwise, they were identical from here on out.

Next, each channel went on to its own ECC83 (12AX7) cathode-follower tone stack with Treble and Bass controls (no midrange), a useful bid for independent EQ that made these genuine two-channel amps throughout, where rivals Marshall, and eventually Hiwatt, had shared EQ stages. A conventional long-tailed-pair phase inverter continued the bid for a bold, tight tone and passed the signal along to a pair of EL34 output tubes with individual bias-adjust pots that made it easy to balance the bias of mismatched pairs. Interestingly, Vox had used EL34s in very rare early renditions of the AC30, as Jim Elyea examines in great detail in his book, Vox Amplifiers: The JMI Years, though higher B+ voltages and a fixed-bias, class AB output stage (rather than the AC30’s cathode-biased class A design) helped these tall British bottles produce a lot more oomph in the AC50. A MkIII AC50 in good condition, with fresh biased tubes, can be loud. Very loud. Running full tilt, an AC50 in good condition can deliver significantly more than its stated 50 watts, even upward of 65 or 70 watts, and more than that at its peaks. Between the gutsy output stage and the efficient low-gain preamp, these amps go a long way toward their maximum potential before sliding into significant crunch, too. This amp’s owner, Jack Wright, says he gets to the breakup zone quicker with a Les Paul and a treble booster, where he finds it “sits somewhere between a [Marshall] JTM50 and a Hiwatt.” The amp was used on several Beatles recordings of the mid ’60s and can be heard – though barely – on much of the live concert-film footage from the same period that you might stumble upon. 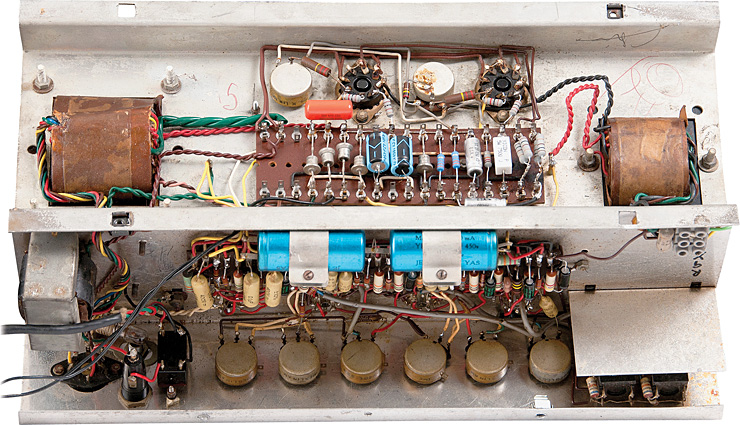 That the AC50 ultimately failed at its goal, one might argue, despite being an impressively loud “50-watt amp” – The Beatles abandoning live performance after ’66 in the face of virtually inaudible stage volume levels – is no judgment on the success of the amp itself, merely testament to the power of pubescent hysteria. Later MkIV AC50s gained a little more preamp crunch and a more traditional mids-forward guitar tone in general when an ECC83 (12AX7) became standard equipment in the first gain stage in place of the tighter, cleaner ECC82. Elyea’s book further tells us that as many as 7,000 AC50s were produced in the JMI years up to the end of the ’60s, with a further 1,200 or so manufactured by Dallas Arbiter and subsequent owners of the Vox brand into the mid ’70s.