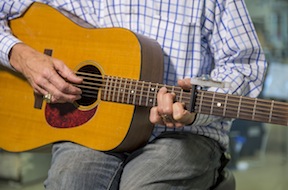 A team of engineering students at Rice University has designed a new capo for guitar they say allows players to more easily make certain chords without cramping their fingers. The attempt was inspired by John Jaggers, a Rice alumnus who plays in an acoustic duo.

“I thought, ‘This is a mechanical-design challenge,’” Jaggers said. “So I thought [it] might be a great project.”

The students, A.J. Fenton, Eric Stone, Lisa Sampson, Nicki Chamberlain-Simon, and Amber Wang, took four months to design and build a series of prototypes that flatten the capo, sweeping the mechanical elements back and out of the way of the fretting fingers while retaining the qualities of better commercial capos including speed of placement and the ability to clip it to the headstock when not in use.

Few think about the problems the guitar poses for a capo maker. The device acts as the barre, taking the place of the index finger that spans the neck in a barre chord and depressing the strings just enough to create solid contact with the frets but not so much as to throw the tones off-pitch. That lets a player change the key of a song to match one’s vocal range without changing the basic chord shapes.

The capo also has to be forgiving enough to accommodate a variety of guitar necks, which not only change from guitar to guitar, but also along the neck of a single guitar. Finally, it had better not dig into the woodwork.

“Most people figure out how to make do and curse a little bit while they play, but it’s pretty awkward,” Jaggers added.

“There are a lot of nuances we didn’t think about before we started, like the curvature of the guitar neck or the materials we had available,” Wang said. “Every part of the prototype, we had to make ourselves. So we had to be creative.”

The students’ final prototype has a two-piece, spring-loaded plastic framework created on a 3-D printer with a hard-rubber strip that contacts and gently clamps the strings. While it’s not yet perfect – the capo has to be placed just so – the team feels they’ve come a long way in four months toward the guitarists’ goal.

They expect the capo project will continue next year, perhaps with a new team of students to work with advisers Ann Saterbak, a professor in the practice of engineering education, and Matthew Wettergreen, a lecturer in engineering.

Pete Anderson to Appear at NAMM With Fargen Amps